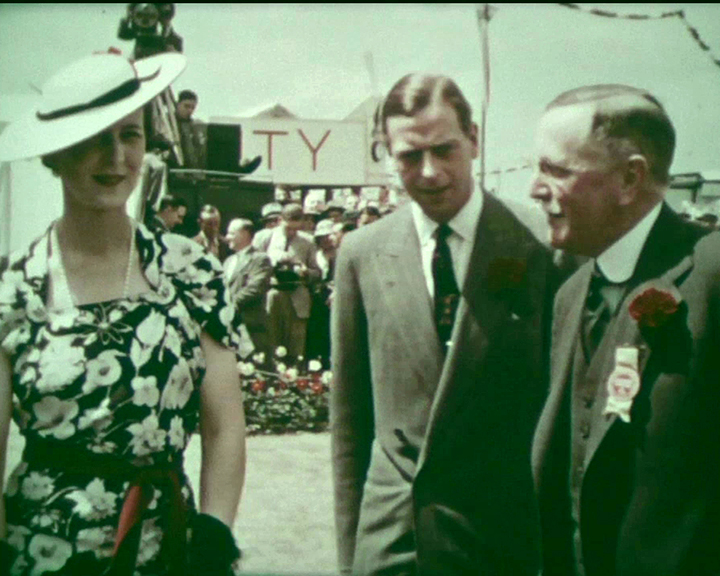 Intertitle: 3rd July 1937. Pageant of Crowning Through the Ages. Held in the Deanery Garden. Each stage of the pageant (acted by children) is titled: Pre Christian Ceremony, Crowning of Henry II, Crowning of the May Queen, Queen Victoria in Kensington Gardens, A London Street on May 12th 1937 and Final Tableau.

Intertitle: A Record of the Ceremony in Cement. The Duke of Kent's name is seen in mortar on the Foundation Stone dated 12 July 1935 along with Princess Marina's signed at the Opening of the Hospital on July 14 1937 Both slabs are seen built into the front of the Hospital at the laying of the Foundation Stone in 1935. External shots of the new Kent and Canterbury Hospital 1790-1987 follow.

Intertitle: Their Royal Highnesses now Visit the Kent County Agricultural Show and are Entertained to Lunch by President and Mrs Whigham. The Royal's enter the arena past a line-up of scouts. Intertitle: Some of the Guests Arriving. The Duke and Duchess of Kent (Prince George and Princess Marina of Greece and Denmark) arrive in the enclosure with some clergymen and guests, and shake hands and chat with some dignitaries. Intertitle: Making their Way to the Ring. Intertitle: Jumping. Intertitle: The Harness Class. Intertitle: Slow motion shows their beautiful action. Intertitle: Parade of the Duke of York's Royal Military School Toy Soldiers. Cadets in period uniform march and perform manoeuvres. Intertitle: Tandem Class. Intertitle: Juvenile Jumping Class - Competitors under Fifteen Years. Signage around the arena includes: Robson's Poultry Foods and CWS (Co-operative Wholesale Society). Intertitle: In the Exhibition Flower Tent. Visitors view the interior flower displays.