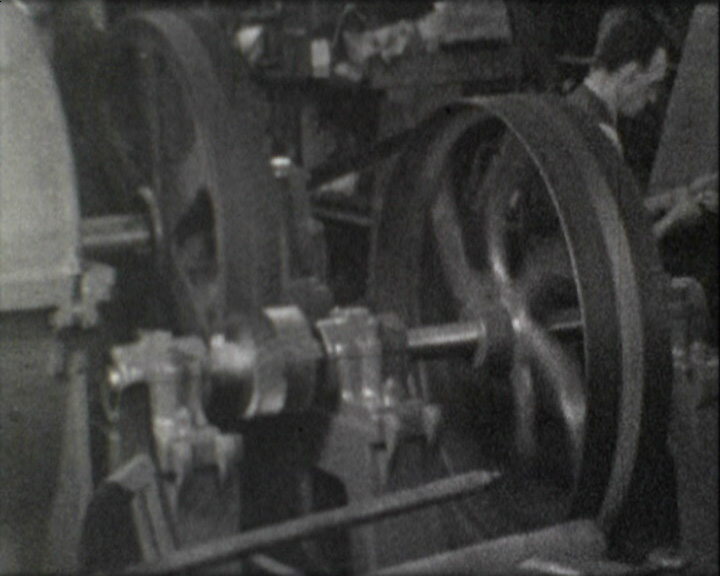 The first part of the film focuses on the dismantling of the iron chimney at the Sevenoaks brick works. A man surveys the site then returns to his office to make a telephone call. Views around the site show piles of bricks, gas cylinders and a pickup truck waiting to take the scrap metal. A man cuts a line through the iron chimney using a blowtorch. The chimney collapses and is shown laying across the ground with several men sitting on it. The next part of the film takes place in the Watford Engineering Works and shows how the scrap metal is put to use to make arms. There are general views of the exterior and interior of the works. Inside a man shovels fuel into a furnace while others prepare scraps of metal for melting down. The molten metal is poured into moulds then shaped on precision machinery. Intertitles proclaiming “We Want Guns!” and “We Want Arms!” accompany the shots of the metal being shaped and turned on the machinery. A close-up of a shell follows the declaration “We Want Shells!”. Inside the factory man continues welding. The final part of the film bears the title “Peace” and shows several friends of the film-maker enjoying a walk. The question “Peace or ?” followed by newspaper headlines referring to bombings in Shanghai and a quote by Mussolini is an indication of the impending threat of war. A fluttering Union flag is the film’s final image.

Rearmament in Britain began as early as the mid 1930s, so it is likely that the production date of this film concurs with its stock date (1937). The intertitles in the film reveal an uncertainty of the future - whether it would bring peace or war - an uncertainty reflected by the rearmament programme at the time. Although war was not inevitable at the time, it was probable, making this ‘show of strength’ by governments necessary. The film is also a fairly early example of Standard 8 film stock (first available in 1932).

Screen Archive South East houses several films which record the work being done in local communities during the Second World War. These include Walton's Parade for Victory (1941) which features a parade marking the opening of Walton and Weybridge's War Weapons Week and Leatherhead Newsreel (1940 - 1945) which contains images of fundraising activities and civil defence duties.

Screen Archive South East also holds films which show factory work across the years. These include A Visit to Peak Frean and Co. Biscuit Factory (1906) and [Ashford Railway Works: Local Traditions and Farming] (ca. 1947), as well as A Family Tradition (1954) made to show the processes involved in making Shippam's food paste.

A copy of this book is available at the British Library.
http://www.bl.uk/

The relationship between food, agriculture, and Britain's preparations for war are analysed in this book.

The National Archives houses a large collection of official documentation pertaining to the Second World War rearmament of Britain. The collections are searchable online via the website.
http://www.nationalarchives.gov.uk/