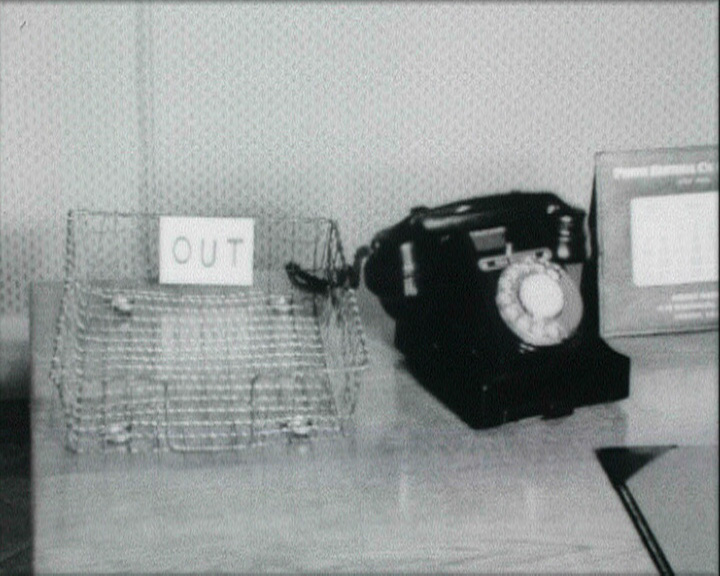 The film is preceded by a leader which reads: “This film has been Specially Commended by Amateur Cine World”.

An alarm clock shows seven o’clock. Clothes draped over chairs disappear and are replaced by a nightdress. Scenes of the man in the bathroom are interspersed with scenes of the woman preparing breakfast in the kitchen. The man takes a train to the office while the woman clears the breakfast dishes, washes the clothes, hangs them out on the line then vacuums the house. After a mid-morning break the woman does the shopping. The man goes for lunch at a pub. At home, a pile of ironing awaits, while at the office the man fills out a pools coupon during his tea-break. Ironing finished, the woman begins to prepare dinner. At the office, the Out-Tray full, the man makes his way home where a glass of sherry and his slippers await. Dinner is served followed by a drink and television. A stack of dirty dishes sit in the kitchen sink. The woman sews while the man drinks whiskey. They watch the eleven o’clock news, the man goes to bed and the woman takes the dog for a walk. The woman sits at her dressing table then goes to bed. “The End”.

An excellent example of a cine club’s creative and innovative approach to (comic) short film-making. Using no dialogue and the minimum of human presence the film cleverly describes both the man and the woman’s daily drudge. Stop-frame animation is occasionally used, as are cuts in editing, making objects apparently disappear.

The film received a ‘Specially Commended Award’ from Amateur Cine World. The magazine’s Ten Best Films competition ran for many years, from the magazine’s inception in 1934, and was highly regarded amongst amateurs and professionals alike. For several years running a selection of films from the competition were screened to capacity audiences at the National Film Theatre in London. A touring programme of the competition films would travel the country, being screened at local cine clubs and societies.

Screen Archive South East houses several other films made by Sevenoaks Cine Society. Amongst these are Sevenoaks Scrapbook (1937 - 1946?) which records events in Sevenoaks during the Second World War, Country Magazine (1959) which follows a couple touring the buildings and countryside of Kent, and [Social Functions And Days Out, Sevenoaks Cine Society] ([ca. 1937]; [1949?]; 1950 - 1951) which shows members of the Cine Society socialising with each other. Screen Archive South East also holds films associated other amateur film societies including the fictional films Mrs Newlywed's First Dinner (1940) which was made by a member of the Ashford Association Film Society, and Bang On (1954) which was made by the Tunbridge Wells Amateur Film Unit.

The BFI houses a selection of periodicals relating to amateur film-making, including Amateur Cine World and Home Movies & Home Talkies. The magazines contain many references to cine clubs and societies nationwide.
http://www.bfi.org.uk/archive-collections/searching-access-collections

Articles from Amateur Cine World on the Ten Best Films competition, 1956 and 1957.