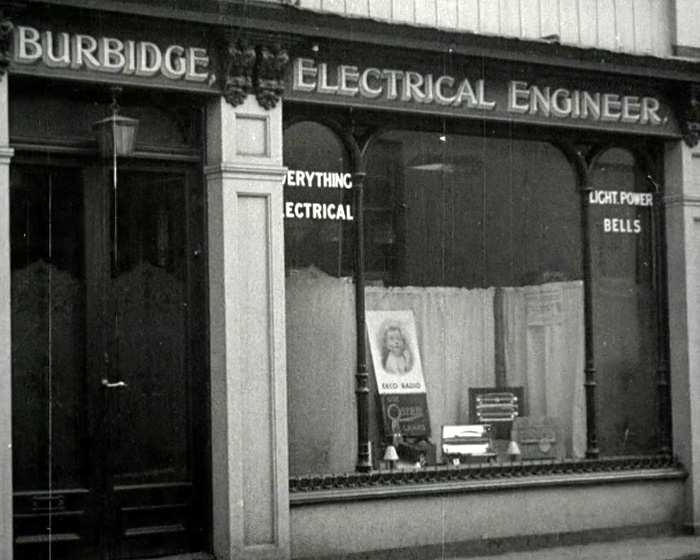 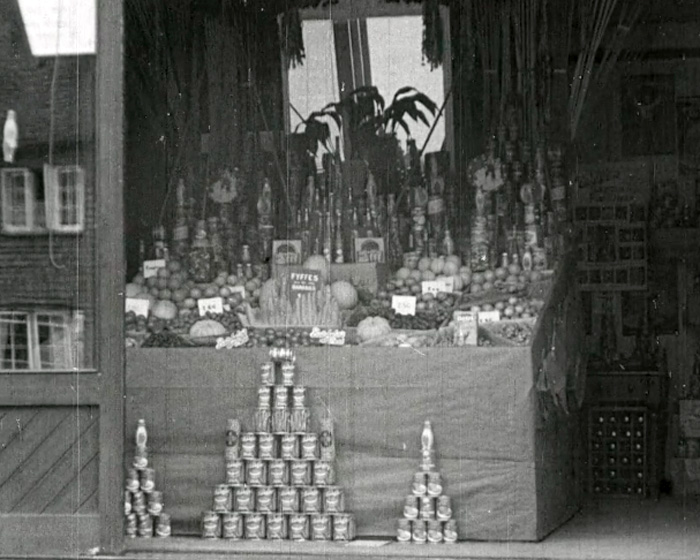 The compilation of advertisements starts with the title screen "The Local Traders' Gazette: An addition to the Programme".

The compilation shows: Cranbrook Engineering Works - the street entrance and the mechanics working on cars. A title screen advertises their services as including "repairs of all descriptions" and provides their telephone number: 87 Cranbrook.

A display of fresh fruit and vegetables, and a tower of tinned goods in the shop front are shown for Mrs E Jarrett Wholesale Fruit, Vegetable and Potato Merchant. High Street, Cranbrook, Phone 45.

The interior tea shop and exterior of Goody's Home-made Cakes is shown with the title screen: "When in Cranbrook - visit Goody's Tea Shop for Home Made Cakes and Afternoon Teas".

The outside of the family butcher shop F.H Head on the High Street in Sissinghurst shows a selection of meat in the windows and two butchers standing outside. Their advertisement states: "Families waited upon daily. Personal attention given to all orders. Try our speciality - All Meat Port Sausage. Phone 36"

A sign outside a Cranbrook shop reads: "W.Butler for Fish and Chips, Fresh Fish Daily, Direct from Grimsby". The owner stands outside wearing an apron as a customer leaves in a car. The advertisement states that "Only the Best Prime Fish Supplied. Our Aim is to Satisfy You!".

Three butchers place meet in the window outside F. G Southon, Butcher on the High Street in Goudhurst. Their advert states "Superior to all others, Southon's Savoury Port Sausages - Made Fresh Daily. Highly recommended for Civility, Cleanliness, Quality and Service."

The outside of R Midmer's Petrol Service Station and Postoffice Post Office, in Goudhurst is followed by a title listing their services including as a "Stationer, Bookseller & Fancy Goods Dealer. Radio & Electrical Engineer".

Shots of the exterior of The Hawkhurst Pharmacy, 1 the Colonade, Hawkhurst, shows traffic passing by. The interior shot is followed by a title screen for "R.A.C.Singleton, Pharmacist, Dispensing & Analytical Chemist.

The shop front for C.J Millen Motor and Cycle Engineer in Cranbrook shows the shop keeper with a bicycle at the pavement as cars pass by. The title screen states "Saloons, Landaulettes & Open Cars on Hire. Distance no object. Experienced Drivers Only Employed. Phone 52."

At E.Day Ladies and Gentlemen's hairdressers in Cranbrook, a woman has her hair styled by a man in a white jacket. His services include: "Singling, Marcel & Water Waving. Shampooing. etc. Manicure. Phone 121"

Fred Payne, Optician & Jeweller, (opposite the Post Office and next to the Baker) on the High Street in Cranbrook offers: "Sight Testing & All Repairs, Prompt and Quick".

The advertisement for the George Hotel in Robertsbridge shows an exterior view of the hotel, inside with tables set, and gardens with outdoor seating. The text informs potential customers that "By vertue of the Catering Qualities of this Hotel, the Magistrates have granted and additional hour's licence".

A couple are seen going into Duck's Radio; Wireless and Electrical Engineer shop on the High Street in Robertsbridge, which has radios in the window. The couple are then seen sat in a garden having tea listening to a large wood veneered wireless radio set.

A street view of T.P Croft Cycle and Motor agent, on Station Road Robertsbridge, shows a man on a bicycle and a man on a motorcycle leaving the forecourt. The text promotes their "Gramophones, Records, Electrical Goods. Agent for Raleigh, Ridge-Whitworth, B.S.A and Enfield Cycles & Motor Cycles."

Outside Bennett Bros. Builders and Contractors, on Station Road in Robertsbridge, there are views of the builders' yard and outbuildings with two men walking through the scene. The Bennet Bros. describe themselves as "Builders, Contractors, Decorators, Sanitary & Electrical Engineers."

An advertisement for Goddard's Famous White Oil "Magic Embrocation" for Horses and Cattle, states the price and product retailers.

Fred Payne has only a title advertising their specialism for Watches, Clocks and Jewellery, Silver & Plate and that they are opposite the Post Office on the High Street in Cranbrook.

The final shots are of a shop front with a name above reading 'W.Hamlin Wholesale and Retail Fruterer'. The shop is shown with a window display that appears to be the same as the one used with the advertisement for Mrs E Jarrett on the High Street in Cranbrook. 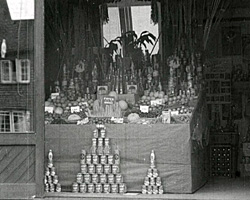