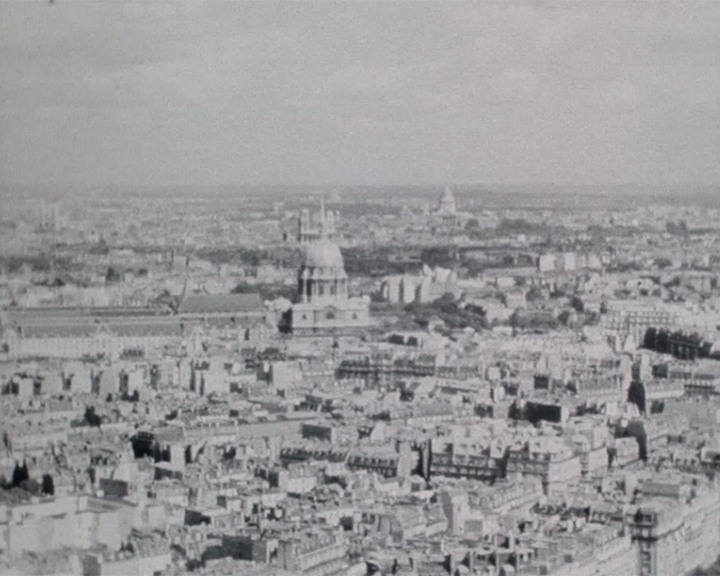 Opening titles: Production: W. Mervyn Barnes Lloyd Barnes. ‘From the Eiffel Tower we look down on the magnificent city of Paris.

The film opens with tourists on one of the Eiffel Tower’s viewing platforms looking out over the city, its buildings and on the river traffic on the Seine.

Intertitle: ‘Let us descend and take a closer view of this romantic capital.’ – is followed by shots taken from a lift in the Eiffel Tower as it descends. We next see a view from the Pont de la Concord with the obelisk and square beyond while traffic passes by. We then look down the Champs Elysee towards the Arc de Triomphe, again with traffic and pedestrians crossing the boulevard. There follows a shot of the Fontaine de Fleuves with details of its sculptures after which we also see the Madeleine in the distance, again with traffic. Next we see the Palais du Justice de Paris followed by a view from the Pont d’Arcole towards Notre Dame cathedral. This is followed by a shot of the Arc de Triomphe du Carrousel and a view down the Rue St Jacques.

Intertitle: ‘The Opera House’ – is followed by views of the ornate building with details of its roof.

Intertitle: ‘Notre Dame’ – shows several views of the cathedral and the River Seine in the foreground.

Intertitle – ‘Book stalls along the Seine’ – shows tourists looking at prints for sale as well as people buying flowers from roadside stalls.

Intertitle: ‘Le Pantheon’ – is followed by views of the building with traffic and passers by as well as its pediment.

Intertitle: ‘Sacre Coeur’ – takes us to the steps of the church of Sacre Coeur in Montmartre with people going in and out of the building. The film ends with a title ‘L’Invalides’ – and views of the building and its dome. The End 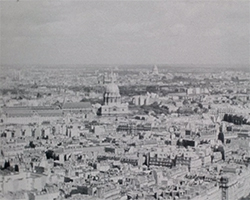