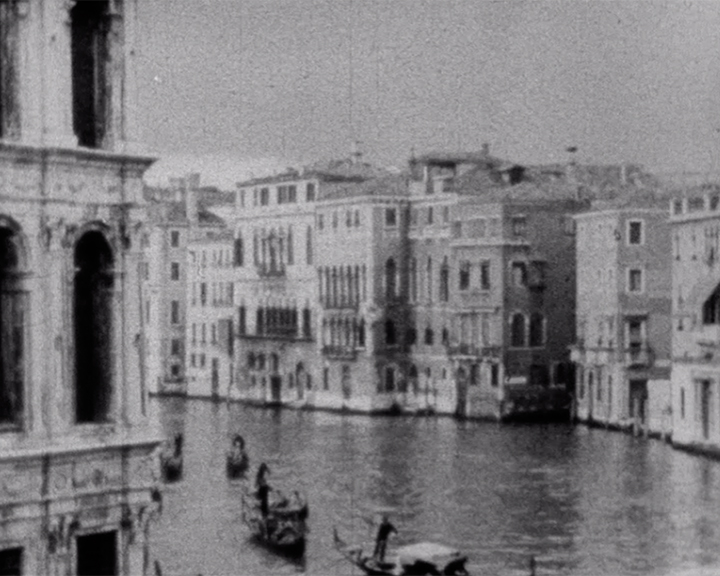 Opening titles: Member of the Institute of Incorporated Amateur Cinematographers Limited and animated logo. Barnes Brothers present Venice. Sole Producers Lloyd and Mervyn Barnes [titles over moving image of gondolas]. “This town resembles no other town, for here there are no horses, no carriages, no dust, no smoke; here one hears nothing but the human voice", Mauclair.

The film begins with a view of the Grand Canal with gondolas and a vaporetto on the water. Other row boats are seen by an overbridge. We then see a gondola pass under a small bridge on a narrow canal followed by another view of the Grand Canal. Men unload a gondola at a quayside and pedestrians are seen walking along a path alongside a canal. Sailboats are moored at the canal side while pedestrians pass by.

Intertitle: ‘The Rialto Bridge’ is followed by a view of the bridge with pedestrians walking across it.

Intertitle: ‘St Mark’s’ – is followed by a view of St Mark’s Basilica and the square filled with visitors. We get a view of the original bronze horses atop the entrance followed by a wider shot that also includes the corner of the Doge’s Palace.

Intertitle: ‘The pigeons of San Marco (St. Mark’s) which enliven the Piazza are an entertainment of never failing interest’ – hundreds of feral pigeons surround people in the piazza and a man is seen feeding a pigeon out of his hand.

Intertitle: ‘The slender gondola with its prow, shaped like the comb of some siren, glides smoothly along past great places whose every name evokes tragic or glorious memories’ Mauclair – is followed by scenes, filmed onboard a gondola, showing a variety of gondolas and gondoliers at work on the water. Tourists in other gondolas pass by along the busy canals.

Intertitle: ‘The Bridge of Sighs’ – is followed by a view of the ornate Bridge of Sighs as the gondola passes underneath. The film ends with a wide shot of the open canal with gondolas and the island of San Giorgio Maggiore in the distance. 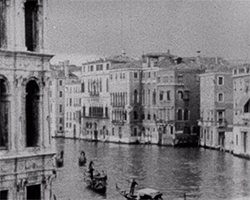