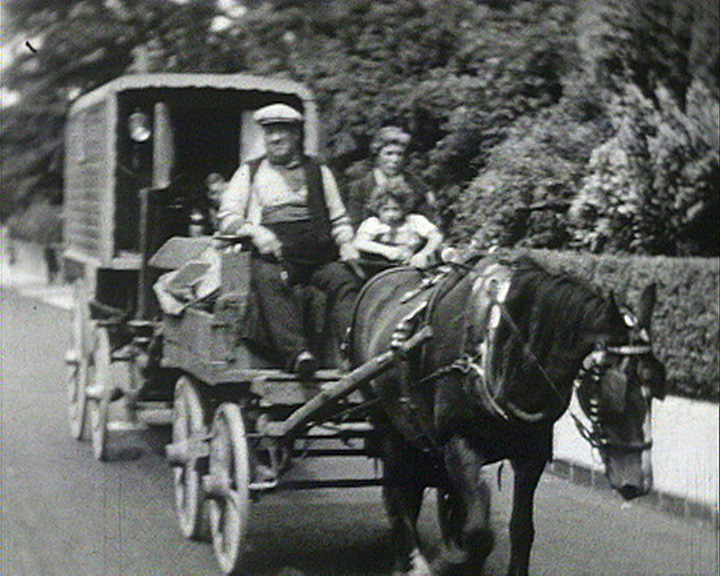 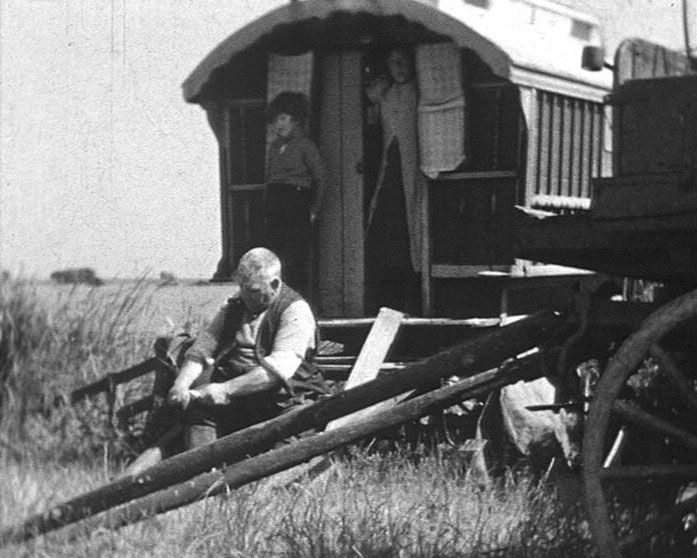 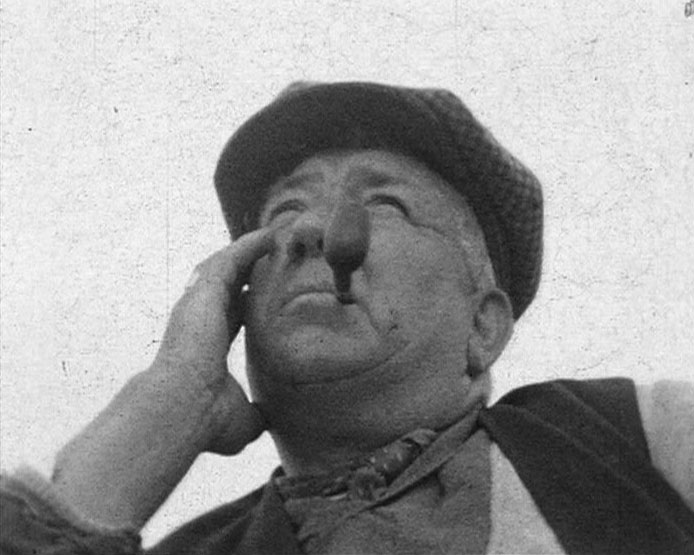 The films opens with shots of a small multigenerational gypsy family who have set up camp in an orchard. The father of the family loads a wooden wheel from the waggon (vardo) onto the back of a cart advertising 'iron and metal dealer Canterbury' before working as Farrier, shoeing horses in a sleepy hamlet. The family move in procession aboard their two horse-drawn waggons and horse-drawn cart through the quiet streets of Canterbury, towards the Cathedral and past the city wall. They are next seen back in the countryside - young twin girls sit in a field as their mother (?) picks potatoes and the horses are retrieved from a grazing site. A young boy stands patiently in the campsite as his mother (?) washes his arms. The whole family return to the fields where they join others picking hops, collecting them in large sacks and wicker baskets. The film proceeds with scenes of the family travelling along rural roads and setting up temporary sites. During their stops they enjoy al fresco meals centred around a table laden with miscellaneous crockery and loaves of bread, watch with amusement as the teenage boys wrestle in the grass, and converse with each other whilst the grandfather (?) whittles a clothes peg. Some of the group then leave the campsite with buckets for collecting water. Back on the land a tractor turns the soil, enabling the women to collect potatoes in their harvesting aprons. The film concludes with a final image of the family sitting in their campsite, followed by a shot of the film-makers John and Bill Barnes removing movie cameras (Cine Kodak Model K) from their open-topped car. 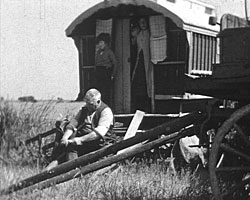 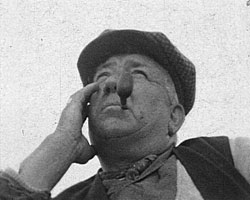 Brothers John and William (Bill) Barnes were enthusiastic amateur film-makers during the 1930s, documenting contemporary life in Kent. Screen Archive South East houses other films made by the Barnes brothers including In the Garden of England (1938?) which uses a year-in-the-life format to illustrate seasonal work on a Kent farm.

In the 1930s hops covered approximately 20,000 acres of Kent and were picked by hand - on average six people were required to harvest each acre of land. This demanded a large workforce, one which was comprised of workers brought into the county for 4-6 weeks during September. The pickers were mainly represented by families from the East End of London, but they also included extended gypsy families who travelled and worked together, following the seasonal patterns of agricultural work. The financial reward for this labour intensive work in the late 1930s was one shilling for every five bushells collected (equivalent to one of the very large wicker baskets seen in the film). It was an annual event which came to an end in the 1960s when hopping became automated. This technological development had a direct impact on the changing fortunes of the gypsy population - their mobile lifestyle became less tenable as the seasonal, temporary farm work dried up and they followed an increasingly settled lifestyle. Screen Archive South East holds a number of contemporary films from the region about hop farming including Kent Hop Farming Part 1 (early 1930s), Hoplands of Kent (1930s), and In the Hop Fields of Kent (ca. 1937). It also has a film entitled The Romany Museum at Selborne (1990s) which explores the history of the gypsies, paying particular attention to their traditional waggons, equipment and tools.

Other images of Canterbury between the world wars can be seen in the Screen Archive South East films The Canterbury Tour (ca. 1923) and Canterbury and Miscellaneous Scenes (1929?).

The Media and Film Collection at the Hove Museum and Art Gallery, "houses examples of optical toys dating from the 1700s, magic lantern slides, together with equipment used by the early Hove pioneers" - part of this comes from the extensive archive of the Barnes Brothers.
http://brightonmuseums.org.uk/hove/

Copies of this book are held at various libraries in the South East.

The book tells the story of the lives of the gypsies who worked in Kent, training and picking hops, fruit, peas, beans and other crops. Copies of this book are held at various Kent libraries.

The book tells the true story of Romany orphan Ethan Bray and is largely based on the childhood experiences of author Bill Lee who is featured with his family in the film With the Gypsies in England (ca. 1939). Copies of this book are available at Crowborough and Mayfield libraries.

The Museum of English Rural Life at the University of Reading houses collections which include items relating to hop picking and the gypsy culture. The Museum’s database is searchable online.
http://www.reading.ac.uk/merl/

"A visit here is an opportunity to leave the modern world behind and experience the sights, sounds and smells of country life in Kent over the last 150 years...we are one of the few remaining places in Britain where hops are grown, harvested, dried and packed by hand, using only time-honoured, traditional techniques."
http://www.kentlife.org.uk/

The Romany Folklore Museum at Selborne houses an extensive collection of Romany artifacts including restored waggons.

Hopping Down in Kent: Hop Picking Between the Wars

The Kent History and Library Centre and Ashford Library hold cassettes of a 1986 BBC Radio 4 oral history series about hop picking in Kent.

This archived BBC page: "Canterbury storyteller Bill Lee presents a series of tales based on his experiences of life travelling the roads of East Kent" - Bill and his family are featured in With the Gypsies in Kent (ca. 1939). Extracts are available online via the BBC Kent website.
http://www.bbc.co.uk/kent/voices/bill_lee.shtml