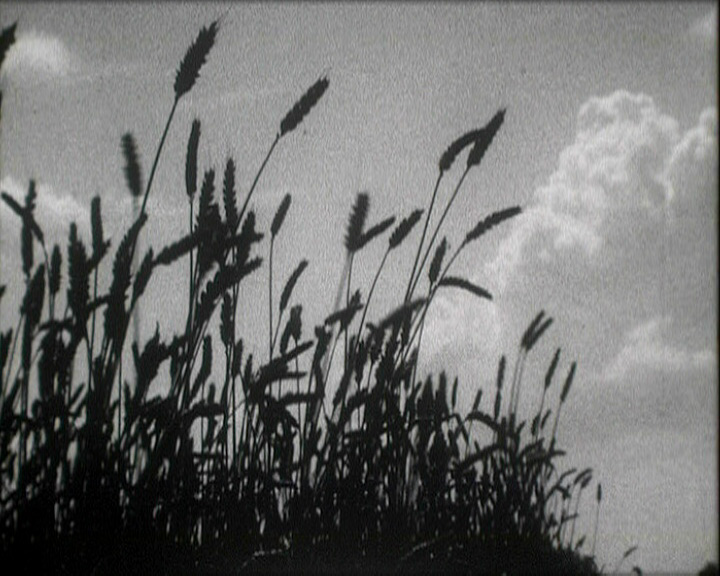 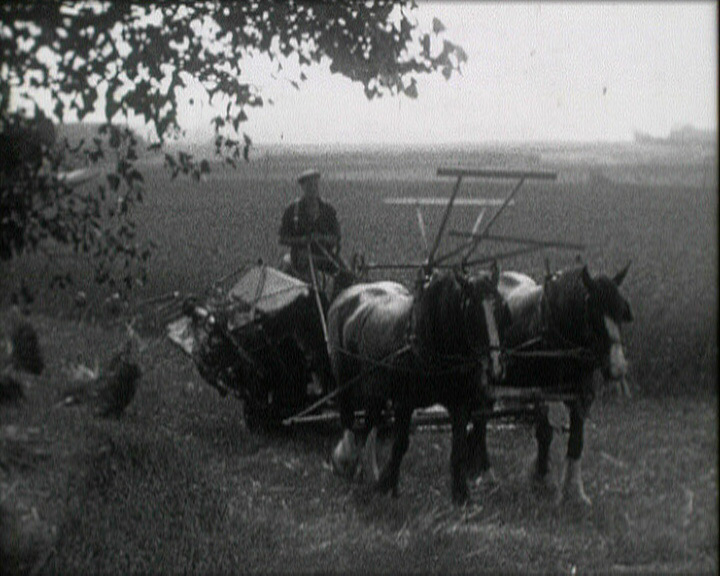 A young girl picks harebells in a field carpeted with the wildflowers, and a farmer and his horse-drawn plough traverse their way through an orchard in blossom. Close-up shots of wildlife follow - rabbits, spiders, a Peacock butterfly, a dragonfly, and a bee collecting pollen. In the woods men labour to fell an oak tree using a variety of implements including ropes, a two-man crosscut saw, a sledge hammer and wedges. With the tree felled the men saw off its thick branches and load them onto a cart. The fields are prepared for the planting of seeds - a two-horse team pull a three furrow plough, and a traction engine and mechanical harrow work the land. At harvest time a horse-drawn binder cuts down the corn and an old man collects the sheaves into stooks, leaving them to finish ripening in the autumn sunshine. The sheaves are loaded onto a horse-drawn cart - it is filmed from afar as it enters the farmyard. Farmworkers transfer the sheaves onto an ever-growing stack. Men, women and children pick hops by hand, taking a well-earned rest as the harvest is tallied. An elderly man carries the heavy hop sacks into an oast house where their contents are emptied for drying. A close-up shot of the farmer (R. Gore) and a shot of sunlight on water bring the film to an end. 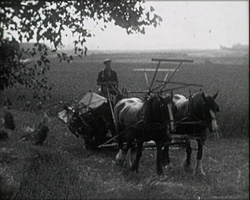 Ernest A. "Spot" Botting was an amateur film-maker who captured rural and village life in Kent pre-Second World War. Other films of his housed at Screen Archive South East include Our Daily Bread (mid- 1930s) and Egerton May Festivals (1934 - 1936).

Egerton, in the Weald of Kent, has traditionally farmed orchards and crops on the high ground, with livestock grazing on the lower fields. The local countryside has been characterized by hay meadows rich in wildflowers and insect life - such meadows are becoming increasingly scarce however due to the modernization of agriculture. It is of interest to consider In England's Garden (1930s) with reference to the technological changes which revolutionized agriculture in Britain in the 20th century. The mechanization of farming was a gradual development during the first half of the century - it only really took hold during the two World Wars. The impact of the wars, notably the reduction in available horses, labour and food imports, necessitated more efficient farm practices and the adoption of machinery which was primarily allocated by the government. Standardisation only took place however after 1945. In England's Garden (1930s) was produced at a time when arable farming was in its transitional phase, as seen by the usage of both horses and machinery on the land. It tended to be only the more progressive farmers who used labour-saving devices such as mechanical ploughs and harrows.

The high-seasonal farming activities were extremely labour intensive and provided work to thousands of temporary labourers. Consequently, the increasing usage of machinery post-Second World War changed the landscape of rural areas - its impact on the structure of a society which had been based on traditional farming techniques for generations was far-reaching. For example, the decreasing emphasis on horsepower effected the futures of craftsmen, including blacksmiths, wheelwrights and saddle-makers. This film therefore captures the moment before agriculture became predominantly mechanized - Screen Archive South East houses Farming and Garden Scenes (1961) and Garden of England (1961) which offer images of automated harvesting (the latter is an official publicity film). Screen Archive South East also holds contemporary amateur films showing harvesting in Kent Country Rhapsody (1930s?), In the Hop Fields of Kent (ca. 1937) and In the Garden of England (1938?).

The Museum of English Rural Life at the University of Reading houses collections include archives, photographs and objects relating to ploughing, harvesting and hop picking in the 1930s. The Museum’s database is searchable online.
http://www.reading.ac.uk/merl/

"A visit here is an opportunity to leave the modern world behind and experience the sights, sounds and smells of country life in Kent over the last 150 years...we are one of the few remaining places in Britain where hops are grown, harvested, dried and packed by hand, using only time-honoured, traditional techniques."
http://www.kentlife.org.uk/