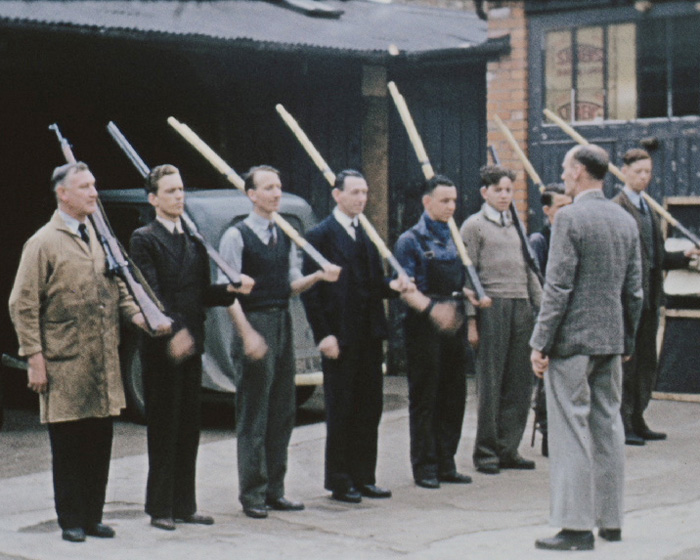 The film opens with a scrolling poem about the war and then a title 'This England'. A view shows a country church surrounded by fields and people rowing along a winding river. A street of houses is followed by a scene of girls on a swing an a domestic garden. A title then reads 'War'. In black and white footage an RAF Wellington bomber is shown taking off and then a biplane flying overhead. Returning to colour film the two girls in the garden pretend to see the planes and run into their garden's air raid shelter. An interitle reads 'Woking's Bit' then'Invasion means a Home Front...and so a Home Guard'. In colour footage men stand in a line in civilian dress performing a drill, most of them have wooden weapons. Only two have genuine rifles. An interitle reads 'Training is not all squad drill'. In black and white footage the home guard are seen marching along a road wearing gas masks. In a country lane, members of the home guard march and then react to the warning 'enemy aircraft overhead', taking cover amongst the trees. On a rifle range a member of the guard fires at a target. A cup is awarded and the men parade the cup along the street. Home Guard battalions parade along a street for the CO. In a playing field, the men assemble to salute the general. An inspection of the ranks takes place and a marching band plays. The film ends with a final salute and parade through the streets of Woking.