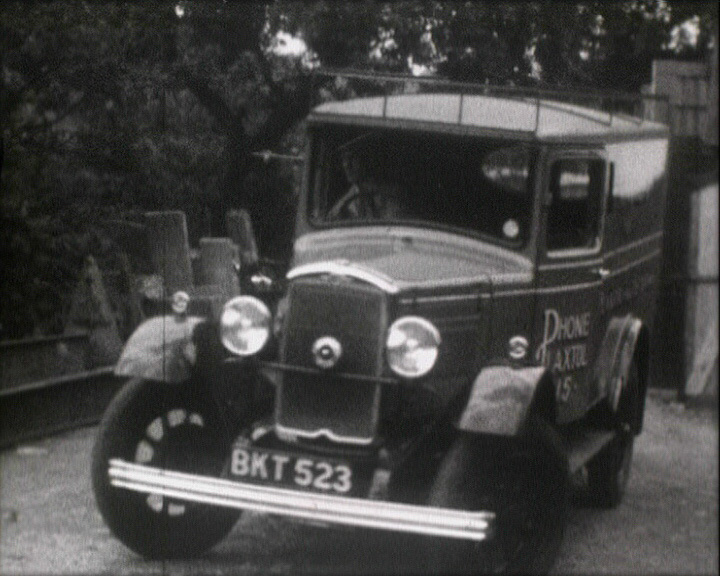 Sussex Trugs and How they are Made

The first film in this compilation of film magazine items shows the processes involved in trug-making (garden baskets). Each stage of the process is shown from the chopping of the wood, to the planing the strips and finally to the nailing of them into shape. The work is carried out in the yard of the Reed family’s workshop in Hurstmonceux (Herstmonceux) which also houses a display of the hand-crafted trugs and baskets.

This film shows two farmers shearing sheep in an enclosure in a field. They shear several sheep using a hand-powered shearing machine. They then wrap the fleece into bundles. Other sheep and lambs wait in the pen.

This film focuses on the ironworks belonging to Hyder and Sons in Plaxtol. A decorative ironwork sign hangs outside the company’s thatched cottage premises. In the grounds are examples of the products made there. The company van arrives, a man unloads iron rods and takes them to the forge. Inside the forge blacksmiths heat the rods in the fire, hammer them on an anvil, then cut and file them in a vice. The pieces are then welded together and painted. The finished pieces - gates, door knockers and other decorative pieces - are shown off in the grounds (by Mr David Hyder). Tall candlesticks are loaded into the van and it leaves the grounds.

The final film looks at Bodiam Castle "One of the finest examples of moated castle in the British Isles" The film-maker films images both within and around the castle. The moat houses lillypads, swans and ducks. A woman sits at an easel on its bank, painting the castle.

Film-maker Frank Perrin Barnitt was a keen amateur cinematographer. He won several Amateur Cine World ‘Highly Commended’ awards, and was mentioned in the World Film Encyclopedia (1933), in a piece on Amateur Cinema.

Two of the companies featured in the film are still in business today (at time of writing). The Truggery continues to produce hand-crafted trugs at the same location, and Hyders operates in the same village though is no longer run by the Hyder family.

Other films that feature trades - or craftspeople include Binding (1997), a film about a bookbinder and his craft, and Leather To Last (1978) about a bespoke Boot and shoe maker. Bodiam Castle also appears in Sands of Time (1949), a publicity film for East Sussex and Sussex Symphony (1951?).

The Amberley Museum & Heritage Centre is home to a number of resident craftspeople, including blacksmiths. The Tool & Trades History Society is also based at the museum.
http://www.amberleymuseum.co.uk/

The collection of the Agricultural Museum at Brook includes wagons, carts, reapers, threshers and other items connected with agricultural work.
http://www.agriculturalmuseumbrook.org.uk/

““Agriculture and domestic life are interpreted through exhibitions and displays". The Museum has a reference library "relating to vernacular architecture, building conservation and rural crafts and skills”
http://www.wealddown.co.uk/

The White Mill Heritage Centre at Sandwich has displays of agricultural and other craft equipment including a blacksmith's workshop complete with forge.
http://www.whitemillheritagecentre.org.uk/

Cuttings from journals and books citing Mr Barnitt’s films are held on file.

This website has a history of Bodiam Castle. The site also offers links to other castle-related websites.
http://www.nationaltrust.org.uk/bodiam-castle/