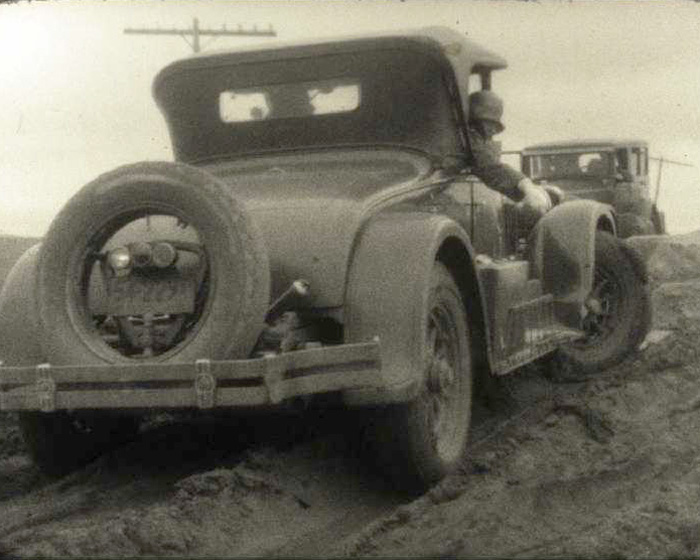 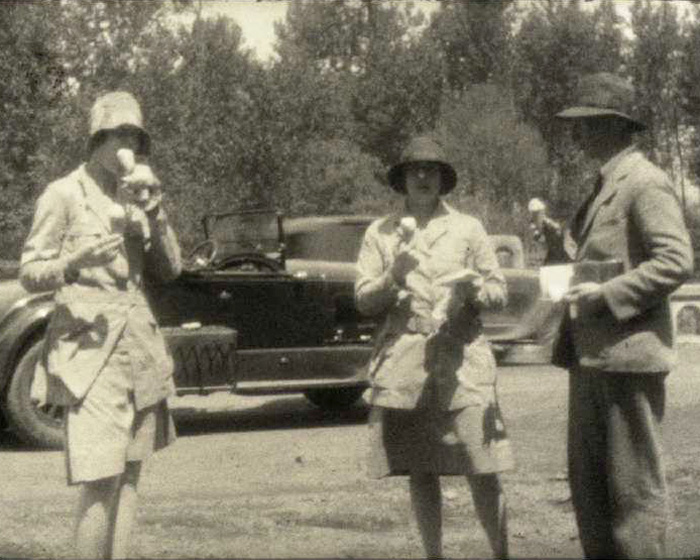 The film continues with the titles: "The picture story of Miss Violetta Cordery's 'Officially Observed Royal Automobile Club' World Tour on a standard 19.5 H.P. (three litre) Invicta". An Intertitle lists all the participants and explains some of the incidents and delays along the route: Calais to the hotel at Reims; Dijon; Vallence to Marseilles; Marseilles to a port to cross the channel by ship to Algiers. Violette buries a car mirror, it having been broken off in an accident. The film then shows her travelling from Algiers to Algeria, and documents being checked to return to Marseilles from Algiers at the port.

The second part of the reel shows Violette Cordery loading the car into a crate on a ship marked: "Miss Violet Cordery's World Tour - Invicta Car"; Scenes show Violette and Miss Simpson aboard ship on the "P&O Mail steamer "Kaiser-I-Hind' to Bombay, India; there are portraits of Violette and staff on deck and playing deck games that include Quoits and Tennis. There are views of the Island Volcano of Stromboli, Italy; a Coaling ship off Port Said [dark shots] and travelling on the Suez Canal.

[Not in online clip]

The compilation includes scenes aboard ship with the group together; views of the Suez Canal; an Acrobat performing handstands on a street; the transport ship on the Suez canal; views of a train and surrounding landscape filmed from the boat. On landing, the Invicta Car (PF 6849) stops in a town surrounded by locals outside a Hotel. Scenes follow of: the car travelling through Bombay [Mumbai] passing an Indian temple; people bathing and cleaning their clothes in a river; a busy street market and several oxen pulling heavy carts on track roads [Shots are shaky]. The reel ends with a brief shot of the group repacking their car outside a hotel [?].

This reel shows: a picnic; the Invicta Car (PF 6849); a Lake; a Ferry; a spare wheel; a Horse drawn carriage; the seaside; a car stuck in sand dunes; and various countryside scenes.

This reel shows: the group at a hotel [?]; swimming in the sea at Waikiki beach near Honolulu (Hawaii); taking a boat trip in a large 5-man canoe; crossing a long rope bridge above the forest canopy on foot; views of a river with a sailing boat and a steam ship hauling cargo vessels; views from a mountain or cliff top; the Benson Footbridge; Multnomah Falls and Vista House on the Colombia Gorge [USA]; views from a tower block or hotel of the convoy of cars below in Utah; views of the gardens around Salt Lake City Temple and Tabernacle in Utah; unpacking supplies from the car to have a picnic and washing the dishes in a roadside well; ending with the journey on a rocky dirt track. [Reel 5 many continue this leg of the journey].

The convoy stops on a railway bridge over a rocky canyon for a series of portraits. This is followed by: the motorcade being slowed down by a large flock of sheep blocking the road; a picnic; a dirt track [dark shots]; setting camp on a windy desert plain over the side of the car; an umbrella being chased across the plain; urban street scenes with crowds gathered around the cars; views of several industrial buildings next to a rocky road; a picnic in a woodland; and Violet and a man [?] standing on a slate stone wall in a rural landscape.

A short sequence showing an Invicta car on a muddy dirt track, having to be pushed and pulled to get through. Views show the car going over a bridge and passing through a rural town or farmstead; the car next to a river; and the car in a deep ditch almost on its side [film is damaged in parts]. 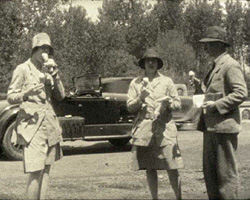 Beginning on 9th February 1927, the Tour left the UK to go via France, Algeria, India, Australia, USA and Canada. The car was in India in April, and at the finish point outside the Hyde Park Hotel, London in July. [Autocar, cited in Thirlby. D, 2006.]