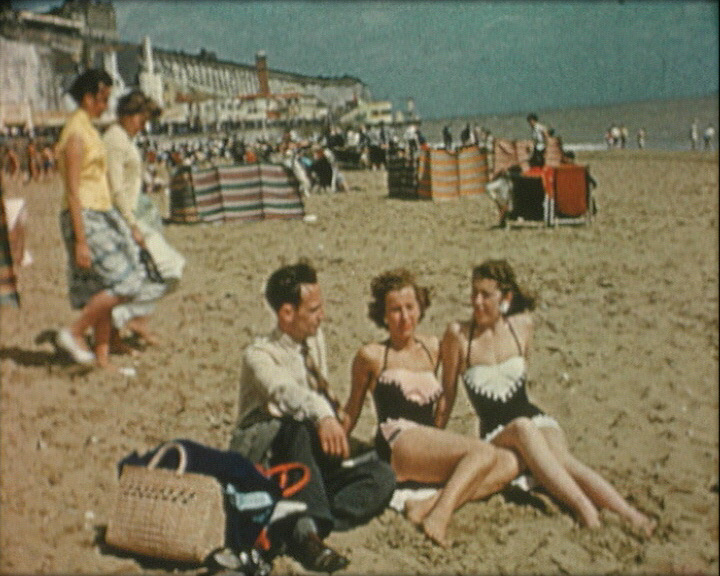 After arriving by stream train at Ramsgate station, the reporter makes his way to the Enquiries Office. He takes the bus to his new office at the East Kent Times where his editor sends him off on assignment to explore and write about Ramsgate.

The reporter first visits the royal harbour, where he sees the Ramsgate Lifeboat. He looks out over the town from the East Pier. From the Eastern Promenade a view of the Marina Swimming Pool shows the high diving boards and the children’s paddling pool. The reporter makes his way down to the pool via Winterstoke Chine and is greeted by two of the Aqua Lovelies. Children play in the pool. Scenes on the main beach; people on deckchairs, sunbathing, a girl with a radio and the children’s playground with mini carousel. Donkey rides on the beach. Families paddling in the sea. High-angle pan across the beach. A man looks through a telescope, focussing on two Aqua Lovelies. The reporter walks home through Ellington Park. He types up some notes before going to the Water Carnival in the harbour. One of the decorative floats features the Aqua Lovelies. Waterskiing in the harbour. Night scenes of waterskiers carrying torches. A firework display and seafront illuminations. The next day the Aqua Lovelies take the reporter to the Model Village then to Cliff’s End to see the Viking ship, Hugin. At the West Cliff bandstand the reporter talks to black-faced performer ‘Uncle Phil’ (Phil Kaufman). Crowded beaches below the St Lawrence cliffs. A little girl rubs sun-cream into another girl’s back, other children play in a bath in the sea. The pleasure-steamer, Queen of the Channel, docked in the harbour, and alongside, anglers fish from the East Pier. Brief shot of the Ram and Gate logo illuminated. Passengers board the General Steam Navigation Company's excursion ship 'Queen of the Channel' departing from Ramsgate Royal Harbour for a ‘no passport’ trip to Calais. Scenes of the ship leaving port and on deck.

Back at the reporter’s lodgings his landlady suggests he visit the ice-show at the Granville Theatre. A poster at the stage door advertises the Carnival on Ice. Close-up of Lou Barber, the producer directing two female ice-skaters. The reporter interviews comedienne Lucille Gaye on the ice. He then heads to the Albion Gardens and the Madeira Walk waterfall where he meets the two of the Aqua girls. They head for Ramsgate airport and board a light aircraft. A view of the town from the harbour follows. The plane lands again at the airport. Crowds line the streets awaiting the Carnival Capers procession. A variety of floats including the Aqua Lovelies on water-skis, a Chinese temple (Dover Engineering Works Welfare), a replica of the Mayflower (Craxford’s Ltd of Ramsgate) and a rocket ship to mars by the Herne Bay Sailing Club. A brief shot of the illuminations. The reporter goes on a coach trip to Canterbury where he visits the cathedral. On arriving back in Ramsgate he finds his story has made front page news. Outside the Royal Victoria Pavilion the Aqua Girls marvel at his story in the newspaper; his landlady is also seen reading the paper. The film concludes by giving the contact details for the Information Bureau, Ramsgate. Finally, illuminations bid a ‘Welcome to Ramsgate’.

The fictional narrative style of the film gives a slight twist to the straightforward listing of attractions used in A Holiday to Jump At (1954), made to promote the resort several years earlier. In this case, the reluctant out-of-towner is won over by the resort’s friendly charm, the variety of entertainment on offer and the health-restoring qualities of seaside. The logo used in the opening titles is from a poster design by Edward Lander.

Screen Archive South East has many other films relating to tourism and/or the promotion and publicity of seaside resorts. Magical Margate (ca. 1925) is the earliest example in the collection. A Holiday to Jump At (1954), All Go Margate (1970) and Ramsgate ... A Picture to Remember (ca. 1971) are examples of publicity films commissioned by local councils. Sands of Time (1949) is also a locally commissioned publicity film and uses a fictional narrative to introduce the sights and attractions of Hastings. Made by a local amateur film-maker, Brighton (1957) is a colourful portrait of a seaside resort.

Ramsgate Library houses a collection of Granville Theatre Programmes which includes the Carnival on Ice programmes.

The Kent History and Library Centre houses official guidebooks which provide information on Ramsgate as a seaside resort, including details of where to stay and places of interest to visit. The 1954 guidebook references A Holiday to Jump At.

The Kent History and Library Centre holds copies of this local newspaper. Articles in the 23rd August 1957 edition include photographs and lists of prize-winning floats.
http://www.kent.gov.uk/leisure-and-community/history-and-heritage/kent-history-and-library-centre