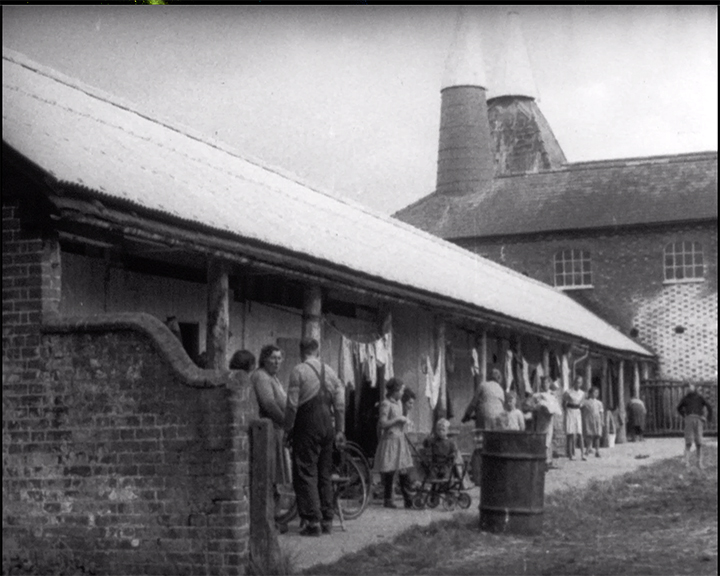 The next section opens with dark shots of Harbleton church, alms houses and surrounding countryside, including a main road. At a nearby hop garden there are shots of hop poles and wire framework, hops are growing up part of the frame. There follows far-off and close-up shots of huts and a converted cow shed. Pickers can be seen wandering around outside and engaged in chores; washing hangs on a line. A man and two women are seen building a fire, a woman exits a caravan and hangs washing on a line; her children stand and watch. A brief shot follows of a family group outside a hut with a dog; the parents lean over a pot which sits over a fire. The boy from the same family sits and pets a dog. Families from the camp are seen collecting water in buckets from standpipes in a field and a large group is gathered outside a hut. Shots of a nearby village; pickers from the camp walk along a street. Back at the camp there are close-up shots of a visiting baker selling bread to a woman picker and a milkman handing milk bottles to a woman from a milk float; the woman laughs as she is handed the milk. Women and children crowd around a grocery van and are handed boxes, there are lots of children standing around watching as women walk off with provisions from the shop. A woman prepares vegetables in a bowl and other women and children gather around a fire with pots and pans. After the meal a woman and child are seen washing pans, another woman cleans boots in a bowl of water. Women and children are seen holding hands and playing 'Ring a Ring o' Roses'; a group of children sing. Shots of pickers with stools and prams walking along a path, a poster reads: "Safety First. Beware of the Traffic on the Roads. Look Think!", another poster produced by the C.E.T.S. warns about the dangers of fires and accidents. More shots follow of women and children walking along a track, a woman carries wicker baskets in a pram. In a hop garden, children are seen wearing wellington boots walking though the waterlogged field. Hop pickers are seen working, the bines are pulled to the ground the hops are picked and put into baskets. Children carry the baskets and help with picking the hops. Shots of a family group picking hops and a female picker with a baby and toddler sitting in a pram. Close-up shot of hops as they are picked off the bine; a woman holds the hops still for the camera, the same woman blows and shakes the bine and hops. Shots of a man emptying the hops into a large basket, other men watch and assist. A crowd of pickers gathers round a tallyman followed by men transferring the hops from the baskets into sacks; a truck loaded with sacks drives off to an oast house; the sacks are lifted into a building using a rope attached to a pulley. Shot of two men standing either side of a sack: "Richards and Son 1952 Boughton Blean"; the sacks are loaded onto a lorry.

Now back in Canterbury, this section of the film opens with shots of the exterior of the C.E.T.S. office. Inside, medical supplies are being packed into boxes by the staff, the boxes are then seen being carried to a car parked outside. Brief shot of the secretary delivering the box to a dispensary and dispensary posters giving details of opening times and how the dispensary is funded through voluntary support. Shots of a nurse attending to an injured girl outside a dispensary whilst children and adults look on; a child holds a cat. Shots of the same nurse now attending to a boy with an injured head and a mother with a baby. Shots of missionaries inside a village hall reading a newspaper; one of them is seen shaving and another hangs hymn sheets on a wooden pole. The missionaries leave the village hall on bicycles. One of them is seen arriving at a camp; he gets off his bicycle and talks with the pickers as they go about there chores. A missionary talks to a picker whilst he helps her pick the hops. More shots of hop-picking; a missionary helps-out. Shot of a parish church in a nearby village and a poster advertising a Sunday School. Shots of children and young people arriving at the church and being greeted by two priests. At the camp a missionary leads children in a song at an open-air Sunday School; two boys hold up the words to the song on a large piece of paper. Afterwards the missionary fills in attendance cards and hands them out to children; close-up shot of a card. Elsewhere, another missionary leads a service with a mixture of adults and children, again two boys hold the words to the hymn. Shots of the congregation leaving after the service, some carry stools and chairs. Shots of the missionaries arriving back at the village hall on their bicycles; inside one of them is seen washing his feet. The men eat a meal around a table together. The film ends with a shot of missionaries and others connected with the mission assembled on the steps outside a small church; they file into the building. Inside, there are shots of the service and the altar.

Closing title: "For we preach not ourselves, but Christ Jesus the Lord, and ourselves your servants for Jesus' sake"; followed by the image of a crucifix.

The Church of England Temperance Society (CETS) was one of a number of organisations that worked amongst the hop-pickers who came to Kent from London for the short hop-picking season at the end of each summer. The temperance movement promoted the message of abstinence, or at the very least warned against the evils of the excessive consumption of alcohol. The hop-pickers would often spend their money in local pubs, drinking to excess, and this combined with the poor conditions in which the hop-pickers lived gave a number of mission organisations reason to work with the hop-pickers. The Church of England Temperance Society began working with hop-pickers in the 1890s, organising social, medical and evangelistic work. By the time of this film in 1952, excessive alcohol consumption and unruly behaviour appeared to be less common, however the CETS is seen continuing the mission to the hop-pickers.

The film links Christian pilgrims visiting Canterbury with the hop-picking 'pilgrims' who visited Kent in great numbers each year:

"This story starts in Canterbury because Canterbury is not only the capital of the ancient Kingdom of Kent but the cradle of English Christianity... From this City missionaries carried the Christian Faith to the people of England... In this twentieth century pilgrims still come from all over the world to worship in the great Cathedral of Christ Church Canterbury. But year by year there comes to Kent another kind of pilgrim". "Men and women, boys and girls from crowded city streets come to spend a few weeks in the Hop Gardens for which Kent is famed. Overnight the character of the countryside is changed as these modern pilgrims in their thousands pour into the villages and throng the lanes in the heart of the Hop-growing country. This film shows something of the daily life of the pickers and of the work of the Church amongst them. Every situation where men and women are involved is a challenge to the Christian Church. Here we see how the Church goes into action in the Hop-Gardens of East Kent".

The film also promotes the continuing work of the CETS and its sphere of influence:

"Amongst pickers like these for over seventy years the Church of England Temperance Society has organised Social, Medical, and Evengelistic work. In the days when drunkenness was rife in the Hop Gardens the C.E.T.S. was a pioneer, leading the Church into action. Today in the Hop Gardens around Faversham & Canterbury the C.E.T.S. Mission to Hop-Pickers ministers to nearly 80 Hop-pickers' Camps, housing some 10,000 pickers".

Screen Archive South East houses a number of films relating to both the temperance movement and the Kent hop-pickers. Brighton and Hove Band of Hope Demonstration (1913) shows children taking part in a demonstration. Films featuring hop-picking in Kent include Kent Hop Farming Part I (1930s), In England's Garden (1930s) and In the Hop Fields of Kent (1937).

In addition to its collections of farming tools and machinery, the library and archives of the Museum of English Rural Life at the University of Reading hold many items relating to hop-picking. The Museum's database is searchable online.
http://www.reading.ac.uk/merl/the_collections/ad_search.html

The Museum of Kent Life at Cobtree continues to grow, harvest, dry and pack hops by hand, using traditional techniques. It also has an interesting online resource section about "hop picking and the people who worked in the hoppers fields, from the 1850s to the present day".
http://www.kentlife.org.uk

A small museum that has a 19th century hop press and exhibition on hop growing and harvesting.
http://www.ukpages.net/kent/museum.htm

“This website collects together materials now available on the social organisation of hop picking on the web. The site concentrates on hop picking in Britain and in New York State in the United States of America.”
http://transportandsociety.com/hopping.html

Online articles about the different aspects of the history of Kent, including an article about a mission to hop-pickers in the 1920s and 1930s.
http://bygonekent.org.uk/article/st-francis-hop-fields