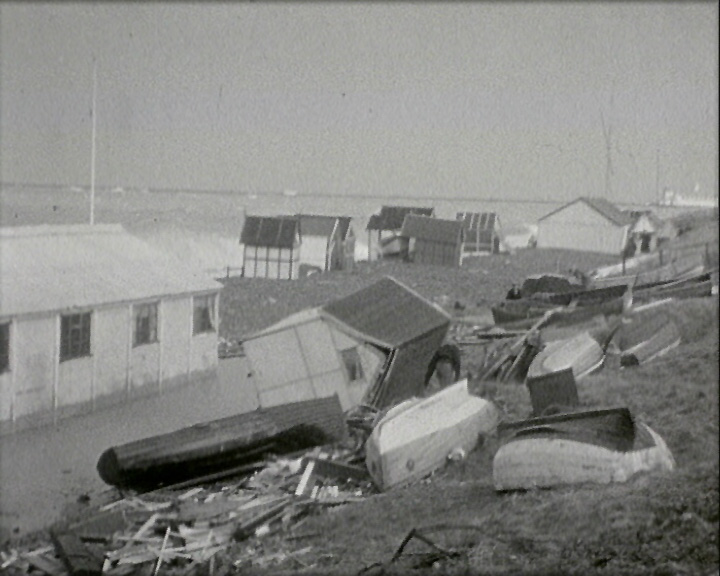 Upturned rowing boats, fragments of wood, a beach hut and even a piano lay strewn on the beach and around the Hampton Pier Yacht Club. Beach huts are scattered across the shore; people survey the damage. Piles of wood lay swept up on the esplanade and along the road, and a stone wall lays in pieces. Scenes around the flooded town follow. Sea water flows through the streets around the Divers Arms pub, Herne Bay. Richmond Street and Mortimer Street are singled out as being worst hit, the water rising to ground floor window level. People wade through the streets, some make their way in a rowing boat. In Memorial Park the tennis courts and bowling green are flooded. A boy rides his bicycle through the shallower water. The film ends with scenes of a large landslide at Beltinge. Filmed from the clifftop, the extent of the landslide and the proximity of the houses to the cliff edge is clear.

In January and February 1953 severe floods hit the coasts of East and South East England, and many parts of northern France, Belgium and the Netherlands. The storm damage shown in this film occurred during the night of 31 January - 1 February, destroying the bandstand on the seafront, the Sea Cadets Headquarters and the sailing club.

The 2003 50th anniversary of the floods produced much local news coverage in the South East and East Anglia.

The Beltinge landslide happened on the night of 3 February, taking with it the tea gardens of the Miramar Hotel.

The East Anglian Film Archive holds material showing the 1953 floods in the east of England.
http://www.eafa.org.uk/

The Kent History and Library Centre holds copies of this local newspaper. The issue 6th February 1953 contains articles and photographs of floods in Herne Bay. The Beltinge landslide is also frontpage news.
http://www.kent.gov.uk/leisure-and-community/history-and-heritage/kent-history-and-library-centre

The Kent History and Library Centre holds copies of this local newspaper. The issues of 6th February 1953 and subsequent weeks contain articles and photographs of floods in Herne Bay. Further details on pp9-10, as well as news on the Beltinge landslide.
http://www.kent.gov.uk/leisure-and-community/history-and-heritage/kent-history-and-library-centre