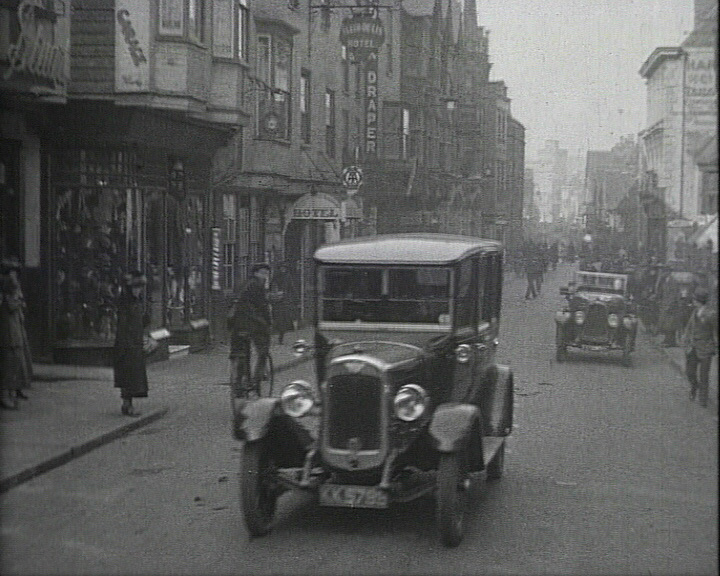 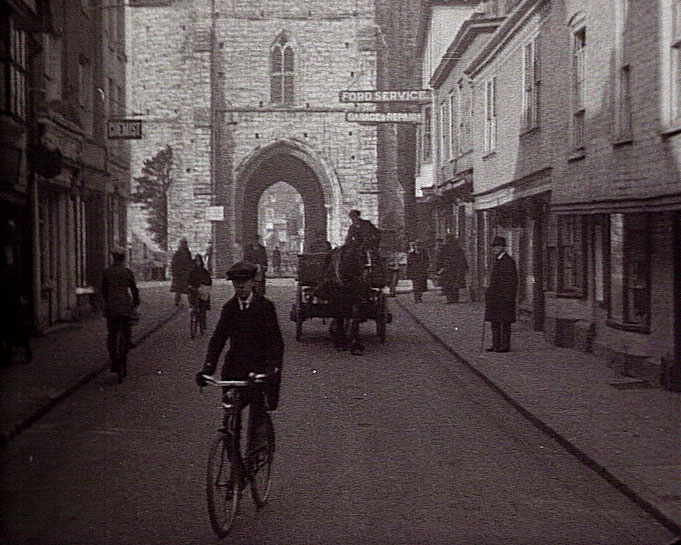 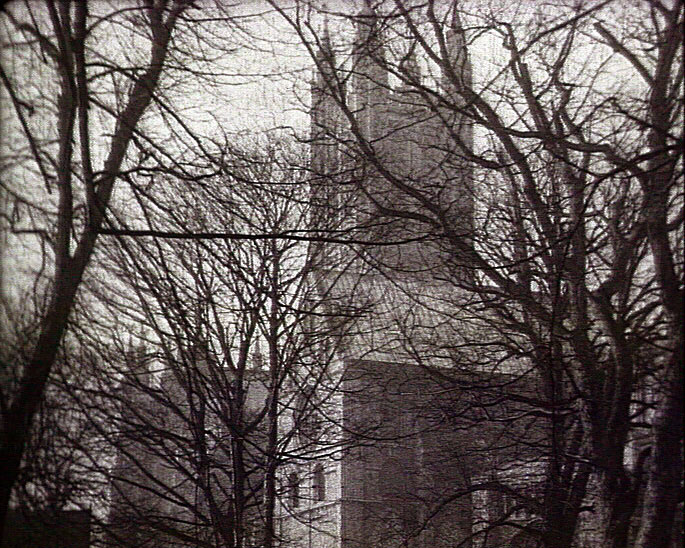 [The Canterbury Tour] opens with an image of Butchery Lane with Canterbury Cathedral's Bell Harry Tower in the background. The camera then films from the back of a moving vehicle as it passes through West Gate and proceeds along the High Street. The roads are busy with the hustle and bustle of everyday life - men, women and children walk along the pavements past shops which include the department store (?) 'Martin's Ltd' and 'A.T. Bates Gun Maker'. The road itself is occupied by cyclists, a few cars (including one driven by a woman) and other vehicles which overtake each other in a seemingly haphazard manner. The camera continues its journey, passing County Hotel, Rose Hotel and St George's Picture Theatre which is advertising the feature films Stardust (1922) and Masters of Men (1923). The film ends with a travelling shot past the busy cattle market on Upper Bridge Street and a static shot of Canterbury Cathedral. 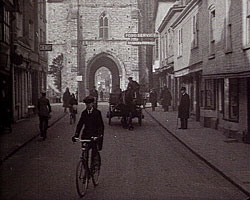 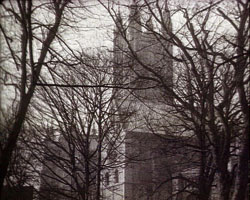 The film-maker and his reason for making [The Canterbury Tour] (ca. 1923) are unknown. It does however appear to be a professionally made film, much in the vein of the early 1900s Mitchell and Kenyon footage which has recently been preserved by the BFI. One could therefore surmise that [The Canterbury Tour] (ca. 1923) was produced for a local market, to be screened in cinemas to an audience keen to see itself and it's city on the 'big screen'. There is also the belief that this footage may have been shot for the opening credits of a feature film - this belief is however unsubstantiated. Screen Archive South East has given [The Canterbury Tour] an estimated date of 1923, basing it on the known dates of the feature films being exhibited at the cinema filmed during the drive along the High Street. The film gives the appearance of a single continuous shot but there are a number of edits within it.

The film is of interest today for a variety of reasons. For example, it captures everyday life on the high street of a prosperous city, providing images of clothing, transport, shopping, etc. It also captures images of buildings that were destroyed during the bombing raids of the Second World War and a thousand-year old cattle market which has since closed. Screen Archive South East houses a number of films which capture the city and its people during the 20th century, including [Canterbury and Miscellaneous Scenes] (1929?), With the Gypsies in Kent (ca. 1939) and Cathedral City (ca. 1949).

Copies of this book, which contain archive photographs of Canterbury, are available at various Kent libraries.

The Museum of Canterbury has exhibits detailing the history of Canterbury from pre-Roman times to the present.
http://www.canterbury.co.uk/thedms.aspx?dms=13&venue=3030489&feature=1&campaign=2552