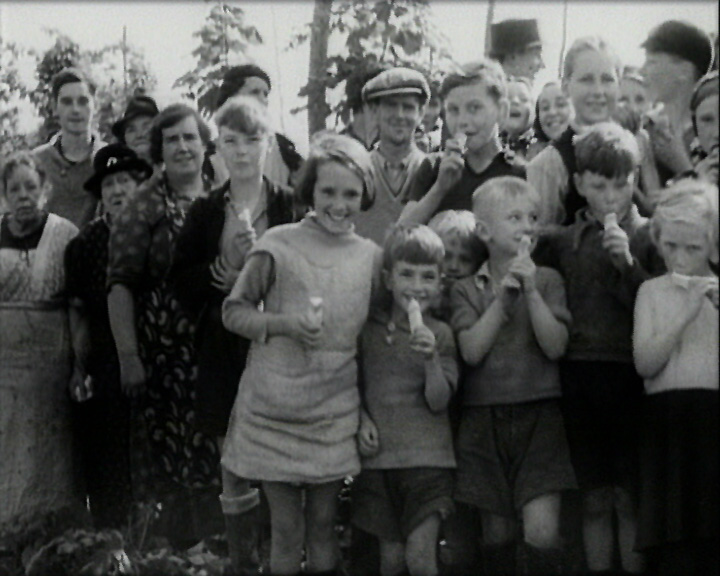 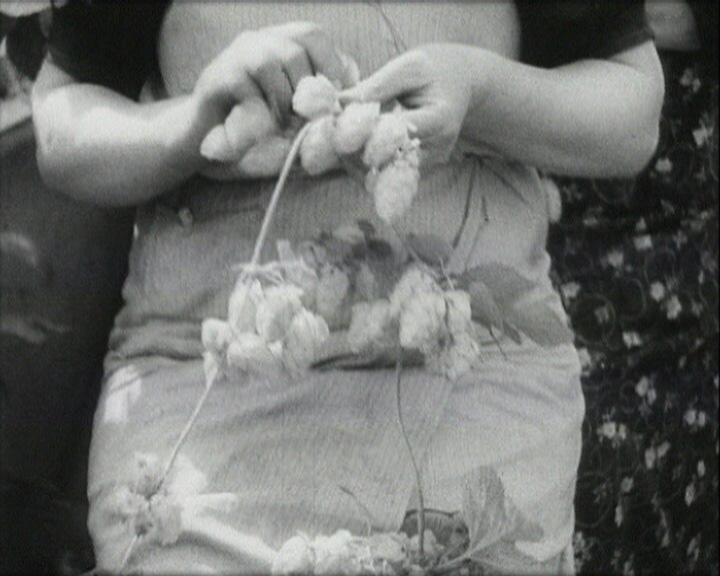 The opening shot shows hops trailing up wirework frames. A group of children eat ice-lollies and pose for a group portrait in the hop garden. Families, mostly women and children, sit on large bins in the gardens and strip the hops from the bines. The measurer, or tallyman, loads baskets of hops into a sack. Outside the hoppers’ huts (temporary homes made of corrugated iron next to the hop gardens) the families build fires and cook food. In the fields men load sacks full of hops onto a wagon, then unload them into the oast house. Exterior shots of the oast houses show the cowls rotating to adjust airflow to the kilns. The cowl is then seen from inside, followed by further shots inside the oast house of the furnace and the hops being turned. Sacks of hops are hung up. Outside in the fields, shots of empty wirework. Some close-ups of hops. A man in a suit looks through a booklet. Further shots of the empty wirework frames in the fields. A shot of a derelict oast house contrasts with a renovated, now residential, oast house. The process of growing the hops begins once more - new hop vines slowly encroach on the trellis and farmworkers spray the vines and turn the soil in the alleys in an attempt to control weeds and pests. 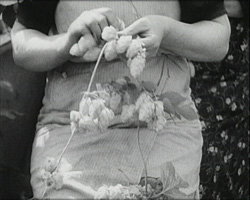 The location for this film is most likely Biddenden, Kent; the name appears on several hop sacks in the film. The film-maker and exact production date of the film are unknown, though it is estimated to have been made in the late 1930s.

The film clearly demonstrates the labour-intensive industry of hop-picking at a time when hop-picking machinery was only just being introduced on many farms. The family aspect of the work and strong sense of community are also well highlighted.

Screen Archive South East holds many films featuring hop-picking. The earliest date from the 1930s, for example, In England’s Garden (1930s) and In the Garden of England (1938?). A later example being A Journey into the Weald of Kent (1960).

In contrast to the old methods of hop-picking, new mechanical methods can be seen in the film South Eastern England (1968).

In addition to its collections of farming tools and machinery, the library and archives of the Museum of English Rural Life at the University of Reading hold many items relating to hop-picking. The Museum's database is searchable online.
http://www.reading.ac.uk/merl/