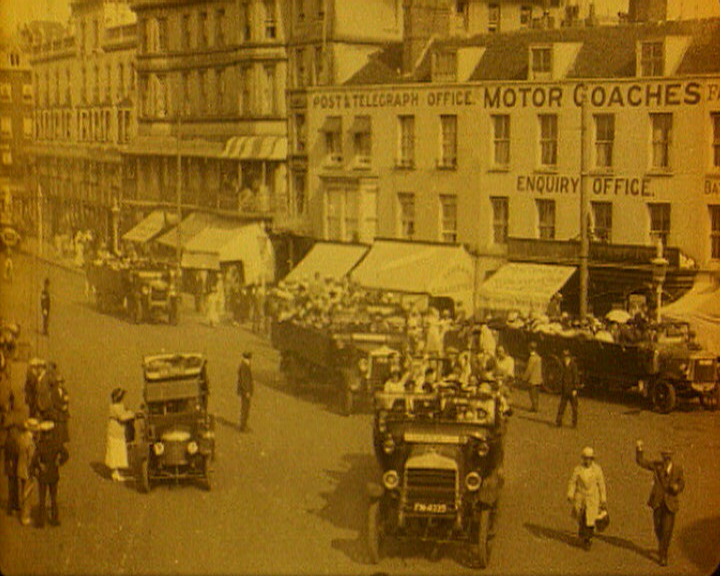 The Thanet Pullman arrives at Margate station after its 96 minute journey from London. Outside the station, crowds of people arrive and leave; a wider view shows motor and horse-drawn vehicles on the road outside the station. A shot of a crowded steamer suggests an alternative mode of transport. Views of the of the resort follow, including the sands and cliffs at Palm Bay, a crowded beach with people on deckchairs, the Bathing Pavilion with beach huts at the base of the cliff and tennis courts and bowling greens on the cliff tops. People stroll along the Queen’s Promenade during Sunday ‘Church Parade’. General views of the open-air musical rendezvous The Oval. Crowds enjoy refreshments outside The Bungalow, a photographer takes a photograph of the scene from the verandah. Motorboats take passengers around the harbour on pleasure trips. A wide view across the Marine Terrace sands. A family explores a rock-pool on the beach - just visible in the background are horse-drawn bathing machines. A view of the harbour and jetty and the Westbrook cliffs and promenade seen from the Westbrook Bathing Pavilion. Crowds on Westbrook Sands. Families paddle in the sea and play with a rubber duck, spades and yachts. An audience, seated in deckchairs, watch a concert at the Westonville Pavilion. Char-a-bancs leave the Motor Coaches offices on daytrips, many of the passengers wave at the camera. A high-angle general view of the Fort Pavilion and Winter Gardens, with the pier and sea in background. Inside the Pavilion people sit at tables and on deckchairs outside. An exterior shot of the Pavilion with palm trees, inside a Thé Dansant takes place. Couples dance in the palm tree-lined ballroom. A moonlit shot of the harbour and lighthouse. A final intertitle urges the viewer to “Come to Margate in the Autumn!”, the last shot shows a small child paddling.

Dating from the mid 1920s, Magical Margate (ca. 1925) is the earliest example in Screen Archive South East’s collection of a seaside resort publicity film. Typically for its time, the resort’s health-restoring qualities are promoted, as well as entertainment to be enjoyed at the resort. Little is known about who made the film but it would seem likely that the local authorities would have commissioned it.
The colours used for tinting reflect the scenes and mood depicted, for example, the warm yellow colour used to promote the sunshine and the green used for the moonlight scene. The moonlight scene is, in fact, a ‘day for night’ shot; that is, a scene filmed in daylight but printed darker to give the effect of evening. Particular attention is given to modes of transport. The steamers were a particularly popular means of travelling to the resort, especially for Londoners, as the companies operated services from the River Thames. The film also contains excellent visual references to fashions of the day, in particular beachwear and Sunday Best worn on Church Parade.

Screen Archive South East has many other films relating to tourism and/or the promotion and publicity of seaside resorts. A Holiday to Jump At (1954), At the Sign of the Ram and Gate (1957) and All Go Margate (1970) are examples of publicity films commissioned by local councils. Sands of Time (1949) is also a locally commissioned publicity film and uses a fictional narrative to introduce the sights and attractions of Hastings. Made by a local amateur film-maker, Brighton (1957) is a colourful portrait of a seaside resort.

Fashion Notes: This promotional film shows crowd scenes, such as ballroom dancing or walking along the promenade – giving an overview of the 1920s slim silhouette illustrating men’s suits and women’s outerwear. There are some closer shots of people paddling in the sea with their clothing rolled up.

The Kent History and Library Centre houses official guidebooks which provide information on Margate as a seaside resort, including details of where to stay and places of interest to visit.
http://www.kent.gov.uk/leisure-and-community/history-and-heritage/kent-history-and-library-centre

Manuscript and printed records for the County of Kent including books, pamphlets, maps, illustrations and microfilm, reflecting Kent's local history, including Margate.
http://www.kent.gov.uk/leisure-and-community/history-and-heritage/kent-history-and-library-centre