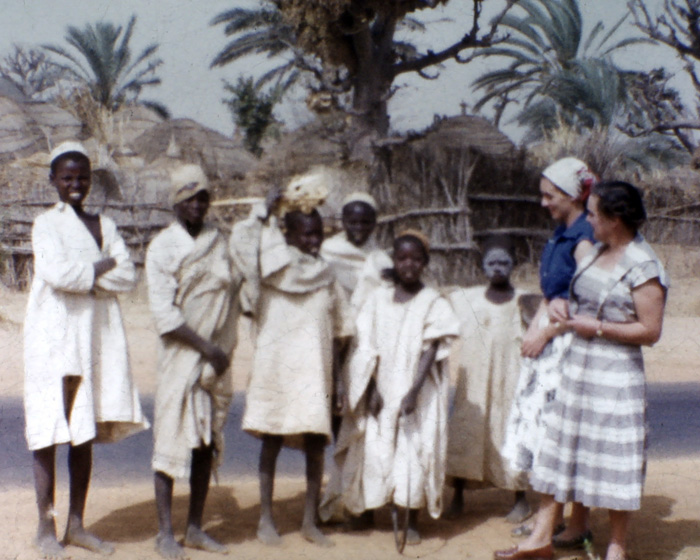 Black and white shots of an BAOC 'Canopus' plane on a runway with the house of Windsor Royal standard flying above the cockpit (possibly for HM The Queen and the Royal families tour of the Commonwealth in 1955?) The shot cuts to a hand drawn and coloured illustration of a map of Europe and Africa, with Nigeria highlighted in a different colour and marked with major cities. The shot cuts to colour shots of an aircraft taking off from a runway and flying over land and a river to complete the sequence.

Intertitle: 'Kano' A sequence of street scenes shows people standing outside several traditional and ornately decorated buildings. In the rural countryside a family group raise water from a well using a traditional method of a weighted tree over a frame, drawing water into a basket. The film cuts to a bustling market scene, where traders sell their wares, a tailor uses a manual Singer sewing machine, a man sits distributing coins from a tent in the currency exchange courtyard and boy walks around balancing a shallow basket of Specie (coins - known as Maria Teresa Dollars) on his head. Several shots of the mixed spice market follow, with baskets of coloured spices on the ground. A barber sits opposite a customer having his hair groomed. There are wide shots of the Great Mosque of Kano with views from the top across the city, followed by several shots of people working the indigo cloth dye pits. Several men stand beneath pyramids of bagged groundnuts awaiting transport to Apapa (Lagos) and a man sells baskets to members of the family. Finally mixed shots show flowering plants and a close up of a butterfly and locust on a bush.

The next section shows the family standing under a Baobab tree with seed pods; a close up of a branch with flowers; playing with a group of children and several close-ups of weaver bird nests woven into the branches of a tree. The final scene shows two men weaving cotton on a loom in the shade of some trees.

Intertitle: 'House of Assembly Kaduna' is followed by mixed exterior shots of the building and gardens.

The next section shows a series of street scenes that includes a train of camels, a wooden barrel beehive in a tree, a woman carrying several large calabash containers on her head, mixed portrait shots of several groups of local people and workers, a close up of a (West African Rainbow?) lizard drinking spilt milk, cutting to mixed shots of several buildings and traditional Jos huts on a cliff side. The film closes with shots of the family in a garden in Kano and views of the Alps from a plane on their return.