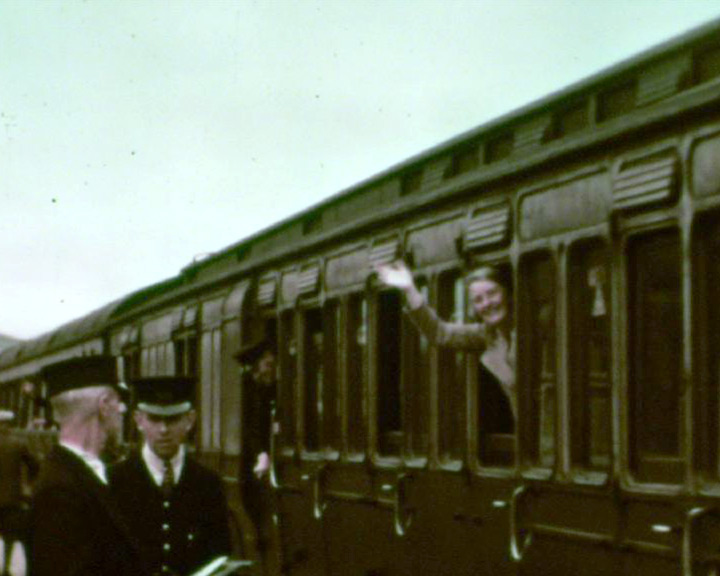 This film opens with views of traffic and trees in deep fog (?) followed by views of Wrexham (Wales)l and an industrial estate with various buildings including 'Packard', 'Firestone' Tyres, 'Coty', and 'Gillette'. Buses pass by on the roads through the industrial park.

The next part provides views of Oxford. Opening with wide views of the river with trees in the centre, small punts on the river and a landing pier. Behind the pier is the 'Rivieria Hotel'. A man in a punt passes under the bridge. Street views with traffic include a public house, and a view of the University of Oxford's Magdalen College and tower. Views of a group punting on the river are followed by shots of the roof-line of the University of Oxford's New College from the street. Views of a busy street show cars, a cyclist and a bus passing by as people try to cross the street. Mixed views follow of houses and dwellings with a more rural residential feel including front gardens and a street view with wild flowers growing on a grass verge.

Further views of Oxford show various architectural features including: a clock on a building, archways and a crest. Scenes of cars on a rural road are followed by a picnic in a woodland where a woman and a young boy sit on a grassy bank eating cake. Street views then shows the exterior view of a shop 'L.M(?) Arnold' with plants outside and views from a moving car including: an 'Antiques' shop on a road; and a village green with white railing. Views of the river Thames with Moulsford Railway bridge include a young boy walking along the river in striped school cap and blazer. A view of a Tudor timber framed 'Kings Head' public house, is followed by street views of connecting Tudor style timber framed white stucco buildings.

The next part opens with a family holiday in Wales. The film shows views of a stream flowing over rocks; fast shots of a small boy running out to sea; the family playing in a garden; a small boy rolling down a hill as a dog chases after him; and sheep in a field. On a beach a woman is shown walking a dog and a man and boy build a sand castle. The boy then plays with the dog whist standing on the sandcastle and the woman plays with dog on the beach. The tide is then filmed coming in and washing the sandcastle away as the boy stands on top.

A woman is filmed doing needle craft, followed by portrait shots of family members sitting on deck chairs. A man with binoculars salutes to something out of vision (?). A woman waves to the camera as she leans out of a train carriage window as it pulls away from a station. Two women on the platform wave back.

Back at the holiday home the group have tea in the front garden surrounded by flowing plants (shots move very fast). A car is filmed parked on a rural road (CXO 756), and the woman picks flowers from the hillside. Goats/sheep graze the hillside. Rural and coastal views of the landscape and car follow. A horse drawn cart in a field works its way along while farm workers fill it with piles of straw. A portrait shot of a housekeeper shows her walking towards the camera and in to the garden. The final sequence is of a street view from an urban house with fencing and views of the exterior of the brick house.

The next section opens with rural views of a field of small straw or hay stacks (Wales), with some close-ups. A horse drawn mechanised unit cuts the straw to create smaller untied bails and drops them back into the field. In 'Isfryn' there are views of a timber framed house with white walls and trailing roses in the front garden followed by a wide view of a rural valley. Two women sit on deck chairs shelling broad beans or peas into bowls. At 'The Nook' a small child climbs the steps. A view of the family waving to the camera from the bottom of the hill is followed by a lady bringing the film-maker a brown leather camera box.

Back at the beach, a small boy playing and runs out towards the shoreline with a toy boat. Various scenes then show a woman getting out of a car in a rural village; views from the garden out to sea; the woman with a camera; a redsetter dog; and a train passing by. Finally, the family go down to the beach and paddle in the sea and the film finishes with them having tea in the front garden.