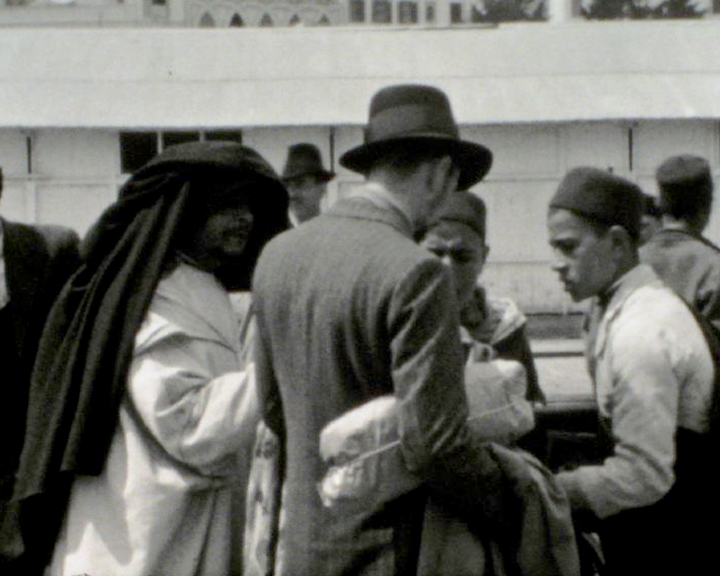 Scenes on board the SS Homeric from the White-Star Line are coupled with views of luggage being lifted on to the ship by crane and views of the dockside with various ships in dock. On deck the family are seen exploring the storage holds along with views of passengers standing on deck. Scenes of small boats or tugs follow including: 'Romsey, Liverpool' and 'Flying Kestrel, Southampton' docked next to the ship. Passengers on the dockside wave as the liner moves off to sea. There is a brief view of the dry dock area and industrial cranes at the dockyard, followed by a large three funnel liner in dock as the Homeric moves further out to sea. The camera passes a second liner 'Edinburgh Castle' with close up views of her side.

On board, a woman sits in a deck chair in a fur coat and passengers are seen playing deck games. A couple stand for individual portrait shots on deck. Views of the shop include the funnel, rope and chain rigging, and lifeboats. A woman and a man take turns at playing deck quoits including several high angle shots of passengers playing deck quoits and shuffleboard on deck. A two funnel cruise liner at steam passes the ship, with a second vessel behind. A close up shot of the hull and side of the two funnel ship is filmed as it lowers its anchor. View of SS Homeric are then filmed from a small excursion boat.

On land, the family explore Gibraltar by car and on foot. Several coastal, rural, and street view show the archway leading to 'Grand Casemates Gates and Water Gate'. The family visit a market, and the men view a jewellery stall with views of rosary beads and beaded necklaces dangling on a frame.

Back aboard ship, the vessel is lashed by waves. The ship docks at Barcelona (?). Car journey (out of focus) with rural views of the landscape. A group gather next to a car, as one man talks to the car driver. There are views of a building marked with the 'Funicular Aero' 'Aerial Ropeway' 'Seilh'a'ngebahn' with views of the cable wire running up the hillside.

Views of buildings and the Benedictine Abbey of Santa Maria de Montserrat (northwest of Barcelona) show a close up of several ornate statues together on the outside of the abbey. The family return outside and gather in a courtyard. Aerial views from a cable car 'Aeri de Montserrat' show the side of a mountain and drinks are served to the group at a viewing platform at the top. This is followed by a view of the abbey in the hillside taken from the platform. The group then stand for portrait shots on the hillside. A wide shot of the building for the 'Furnicular De San Juan' stop on Monserrat Mountain, includes views of the cable car route in the landscape, and views of the mountain region. Exterior views show the 'Funicular De La Santa Cueva 'Al Rosari Monumental' building.

Back in the car the family explore the landscape filming from the car window. There is a close up of a dog dressed in a hat and coat holding a large wooden stick and a local man pets the dog. Wide views of a large mountain village (?) and views of one of the cable car towers in a main street, is followed by views of the Columbus monument and a square and gardens next to a busy street. Four men are then seen holding film placards promoting the MGM film 'Justicia Divina' featuring Charles Laughton.

Back on ship, a young boy is seen swiming in a pool with other children. Other passengers sit around the pool on deck. Coastal views of another port town and views of the hillside are filmed with rapid cuts between shots.

The SS Homeric is next seen in Port Hercule, in Monte Carlo with views of a lighthouse and other ships in dock. Views of the boarding point for the SS Homeric are followed by the family on a promenade overlooking the dock and views of a square followed by the 'Hotel de Paris', 'Restaurant du Cafe de Paris', and the Opera House with gardens. Several street views are filmed before returning to the port. In a bathroom at a hotel (or in the cabin?) a woman brushes her hair whilst the film-maker captures his reflection in a mirror. Coastal views of the ship are then filmed from a car on a mountain and there are views of a village with ruined buildings and large cacti plants (?).

The next excursion is to central Nice, France. Two women sit outside a tea room. The French flag hangs from street furniture and the streets are lined with palm trees. Mixed views of Nice are filmed from a moving vehicle including: 'Hotel Atlantic', 'Hotel O'Connor & Ambassador'; views of the promenade and Pier; 'Hotel Negresco', and views of the street. A woman passes the camera selling copies of the 'L'Echo De Paris' newspaper. On a small boat in the bay, views of the coastline are captured. Back on land, there are views of the ship in port and people on the dockside. The family go on a coastal walk and a woman and child climb up a cliff. On a car journey there are rural views as the car follows a bus. Portrait shots of a group of girls (school or family group ?) are filmed outside a building. The road tour continues with rural views of cows and livestock in fields.

Back in central Nice, the group gather at a cafe to have a drink and smoke cigarettes. Close-up of three bottles of alcohol on a table show they are drinking 'Cinzano', 'Vermouth' and 'Gordon's Dry Gin'. The group raise their glasses to the camera. A view of the 'Grand Cafe Napoleon' on the island of Corsica is followed by street views and buildings on a hillside with narrow streets and a marble statue of Napoleon Bonaparte with lions. Coastal views of the SS Homeric at sea from the beach finish the excursion.

Back aboard ship there is a short shot of the pool followed by a viiew of the SS Homeric from a smaller excursion boat, and views of her bow. Deck games are in progress, as a large crowd has gathered around two men on deck. The men have had their hands and feet bound in the sitting position and are trying to push each other out of a circle on the deck.

Whilst touring a port town (possibly Tangier, Morocco ?), a group of musicians are filmed dressed in traditional clothes play instruments and sing. Islamic artwork and fabrics are shown draped on the walls. A group of men sell their wares to passing tourists at the port. A tour of a village close to the port includes scenes of a Snake Charmer, white washed buildings and a traditional market with children and people going about their daily lives.