This collection by Charles Ernest Shippam documents his passion for motorcycle and motorcar competitions in and around the Chichester area, as well as on a tour. The collection also features several international holidays to Norway, Japan, Middleberg, Holland (The Netherlands), and Ooigem in Belgium.

This collection, by film-maker, Charles Ernest Shippam (1908-1991), shows his passion for motorcycle and motorcar competitions in and around the Chichester area as well as on a tour. The collection also includes several international holidays to Norway and Japan, and a visit to his aunt Margaret (also known as Sister Joachim) in a French convent in Ooigem, Belgium.

C. Shippam Ltd, a meat and fish paste company based in Chichester for over two hundred years, was a traditional, family-owned business, with long serving, skilled staff. A.E. Shippam and his siblings shared the directorship of the family business as the older sibling retired - passing the management of the business down the family line. The firm is often portrayed as part of the heritage of the local area.

Screen Archive South East also holds a series of promotional films made by the company, to advertise their potted meats and pastes. See CID: 563. In support of the film collections, West Sussex Record Office holds collections of photographs and documentation relating to Margaret Shippam (Sister Joachim), the Shippam's firm, and has business records and publicity materials from the Company. 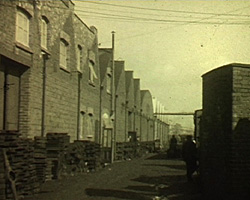 Various of scenes from the Riley motorcar factory (Durbar Avenue Works?), shot by Ernest Shippam at the end of the 1920s.

This very short sequence shows a group of men gathered on the deck of a ship with a motorcar (continued from TID: 6462 & 6463) as filmed by Ernest Shippam in the 1930s. Part of the Motorcycle and car club trip.

This film shows a series of market and street scenes filmed outside Middelburg Town Hall by Ernest Shippam during a holiday in Holland in 1931. Several women in traditional national dress pass the camera carrying their shopping, accompanied by young children.