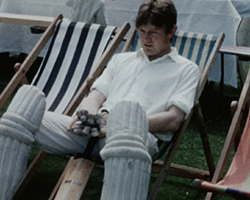 Scenes from the South Bersted Cricket Mach knockout competition [continued from TID: 6418]. The film includes the SBCC flag flying on the pavilion, the chalk board 1st round pairings played over 4 overs. Scenes from the match, plus women laying the table; children playing short cricket and competitors waiting to bat. At a break the children eat a salad lunch. 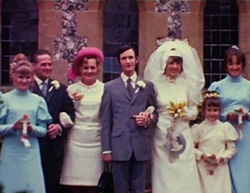 A two part family film that includes a wedding at North Bersted Parish church, with the bridesmaids in pastel blue and the wedding party posing for photographs. The second part shows a family outing to the Isle of Wight from Southampton. Shots include views of the ferry passing through the docks with close-ups of the Queen Elizabeth II moored there.

This film shows scenes from a family sailing holiday and trip to the Warnerâ€™s Woodside Bay holiday camp on the Isle of Wight. The opening scenes show the family tethering the sails of a boat on a windy beach at a local sailing club [some damage, not included in online clip].

A film showing a family holiday to Majorca, that includes the family leaving their aircraft on a runway, a young girl sitting in an inflatable ring at a villa pool, and the family looking at the view from their apartment balcony. The family visit a market, have drinks in a street cafe and visit the Antonio Parietti and Coll monument in PollenĂ§a.

The film shows an air display featuring the RAF Red Arrows display team, followed by a group of young people drinking alcohol in a seating area, outside "The George & Dragon" pub during a 'three legged race', as a part of rag week events (?).