Screen Archive South East's collection of films pertaining to the Royal Sussex Regiment comprises over thirty amateur and professional films dating from 1914 - 1960 (the year in which the Regiment was disbanded). The films not only cover a wide timespan, but they also cover a wide variety of activities and events. The earliest two films, Southdown Fighters: The 1st Southdown Battalion (19 November 1914) and The 5th Battalion Royal Sussex Regiment at the Tower of London (1915) serve as visual records of the troops who would shortly be sent to the Front Line in France. [2nd Battalion Royal Sussex Regiment, Karachi] (1932 - 1935) and Christmas in Korea (December 1956) meanwhile serve as records of tours abroad.

The majority of the films however record the Regiment at home, particularly at its Chichester Depot, the Roussillon Barracks. The Barracks served as the setting for Quebec Day anniversary celebrations, the last of which was captured in several amateur films including Quebec Day (13 September 1959), and for numerous passing-out parades in the years before the Regiment disbanded, such as [Passing-out Parade at the Regimental Depot of the Gaza Intake] (22 January 1960). 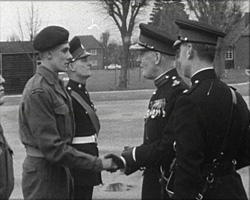 [Passing-out Parade at the Regimental Depot of the Gaza Intake]