Along with scenes of family life and events, selected films in the collection include several made by John Linehan as an International Association of Medical Laboratory Technologists (IAMLT) member. These include participating in a social gathering during the Vienna IAMLT conference in 1972, and his work at Brighton Hospital in 1956. The latter films show a humorous take on the rights and wrongs of working in a medical lab, and a documentary style narrative on the working practices and records management systems, in a Hospital Cytology laboratory.

This intertitled film shows the family going on holiday to Copenhagen, Denmark, with interior shots of a London Airport terminal building and views from onboard a Scandanavian Airlines (SAS) plane. The family visit various locations including: Hjerl Hede; 'Wilh. Jensebsvej' in Hobro; a housing construction site; the Tivoli Garden rides; and beaches. There is a tour of their holiday accommodation and portrait scenes of 'Eigil' dressed in a uniform. 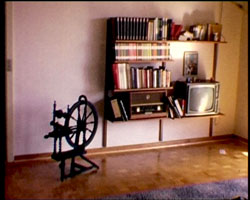 This titled film shows the family on holiday in Denmark, with scenes at the families holiday home, touring the countryside, and visiting Laugesens Have, VidebÃ¦k. The family stay at the "Hotel RingkÃ¸bing", visit the I.C Christensen statue, NÃ¸rre Lyngvig Lighouse, beach and harbour. The family leave the Hotel FÃ¦rgegaarden, Faaborg to fly to Copenhagen to visit City Hall Square with fountain, and take a boat trip past the ornate Church of Our Saviour. 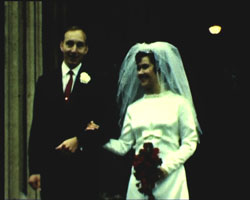 The first section shows a wedding with interior views of the church, the bride walking down the isle, and shots of the reception with the bride and groom cutting their large wedding cake. The second section is a short slapstick story with a man and two teenage boys acting out scenes in a garden [Bexley?]. The final section has shots of Brighton showing Madeira Drive, Palace Pier, and the gardens at Preston Park.

This film shows the family sunbathing on Brighton beach with views of Palace Pier, a series of double exposure sequences showing Mrs Linehan and a teenage girl walking the family dog in Withdean Park, and a blackbird tending to her young in a nest built in the garage. The nest is balanced on a shelf next to old tins of paint. 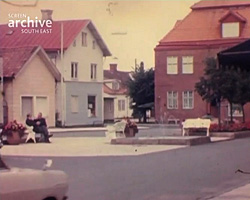 This animated intertitled family holiday film shows the family's visit to the Scandinavian countries of Denmark, and Sweden visiting several large heritage sites and zoos by ferry and road. The outings include visits to Hjerl Hede living history museum; Skansen pleasure park; a brief stop to watch gliders and small aircraft on an airfield; and several boat and ferry trips between towns and islands to tour the landscape via sea and road.

This titled film shows the family on holiday in Austria, visiting Badgastein, Grossglockner Mountain, Hohe Tauern mountain range, KÃ¶lnbrein Dam, Heiligenblut, and Zell-am-See. The film shows the family boarding a plane, taking photos at their hotel, touring the countryside capturing panoramas of the alpine view, lakes and KÃ¶lnbrein Dam. In Heiligenblut and Zell-am-See, the family tour the towns, and watch a cage-style train carry vehicles up the mountain.

This film documents the life cycle of a hospital laboratory record system and how patient data is processed and documented. There are two versions of this film taken at Brighton Hospital's Cytology Lab see also TID_5542.

This film shows members of the International Association of Medical Laboratory Technologists (IAMLT) group taking an extended excursion around the city of Vienna, during their trip to the city for the 10th IAMLT Congress. The group take in many of the sights including several churches and cathedrals, a trip on the river and a tour of a medical laboratory. Scenes of the conference are not shown.

This inter-titled film documents the life cycle of a hospital laboratory record system, and how patient data is processed and documented. There are two versions of this film taken at Brighton Hospital's Cytology Lab. See also TID_5317.