The Spot Botting collection comprises over fifteen films made by Ernest A. "Spot" Botting during the 1930s. Spot Botting was a keen amateur film-maker who lived in Egerton, Kent. Several of his films centre around events in the village, such as Egerton May Festivals (1934; 1935; 1936) and The Last Year of Peace (1939 - 1940).
Both films consist of scenes of everyday life in the rural idyll, capturing a community and its individuals enjoying local events and the countryside. The latter film however also contains stark images showing how this idyll was affected during the early stages of the Second World War, with footage of the aftermath of bombing raids. Spot Botting clearly indicate his appreciation of the landscape around him - producing films which show images of Kent in the years preceding the Second World War, in the years before mechanisation drastically altered the agricultural landscape. This is seen, for example, in In England's Garden (1930s), Our Daily Bread (mid-1930s) and his films: The Poetry of Motion; Exquisites of the Insect World; and Old East Sussex [Hop-picking], all dating from the 1930s.

The remainder of the collection is made up of home movie footage and of a couple of fiction films. Overall Spot Botting's film collection offers some fascinating, well-made amateur films, which document rural life in Kent in the decade before this way-of-life was altered so dramatically by world events. 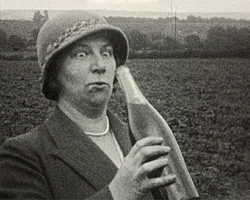