A collection of films from amateur film-maker Roy Bell, showing a series of local scenes and events in Kent during the 1950s and 1960s.

Amateur film-maker Roy Bell made many films under the guise 'Ding Dong Films'. His well-made productions include scenes and events in Kent during the 1950s and 1960s. His film Herne Bay on Ice (1963) captures the surprising event when the sea froze over. The film has an accompanying commentary about the images and the history of similar local events. Other films of his capture local church and village activities, such as in St. Mary the Virgin, Reculver - A New Chapter Begins (1962 - 1963), and provide portraits of the surrounding area, such as in Speeding the Thanet Way (1968?). Roy Bell’s film collection also includes footage of his 1961 wedding which was filmed by a friend, and scenes of his subsequent honeymoon in Bournemouth and the New Forest. 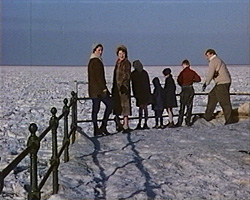 Speeding on the Thanet Way

Using time-lapse techniques, the film records a speeded-up journey along the length of the A299 Thanet way in Kent, traveling East to West, from St Nicholas at Wade to Brenley Corner. Filming both from the roadside and 'point-of-view' shots from the traveling car, the journey appears as a lightening fast ride through the Kent countryside.