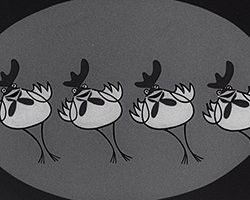 Shippam's advertisement using black and white animation and classical arias features singing chickens, shrimp, and fish. The film opens with three spotlight beams which come together, to form the logo as it appears on the labels of the Shippam glass jars. 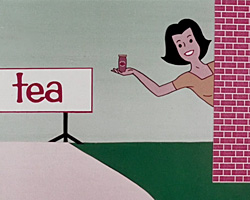 A short silent animated segment advertising Shippam's meat and fish pastes. The sequence mooves along an animated road lined with houses and a church amongst road signs reading 'Enjoy', 'Shippam's', 'For Tea'. A cartoon woman leans out holding a jar of Shippam's paste. The sequence ends with a closeup of the jar. 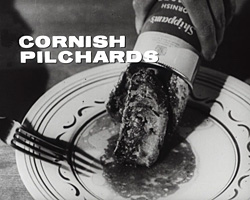 Television advertisement for Shippam's new meat and fish paste selling at one shilling. 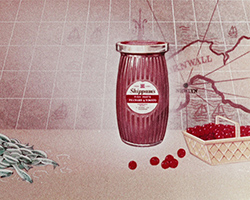 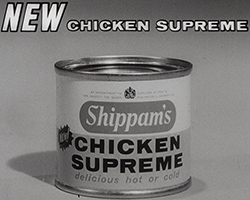 An advertisement for Shippam's "new" tinned chicken supreme. The advert shows the chicken in white sauce as a meal or as a snack with tea, served hot or cold. 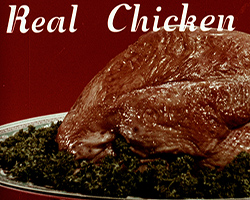 Advertisement for Shippam's chicken paste, consisting of two shots, starting with a succulent roast chicken on a serving plate. Graphics appear which form the shape of a Shippam's paste pot which quickly becomes the real thing. The camera zooms in to a close-up of the label which also features the company's trademark. 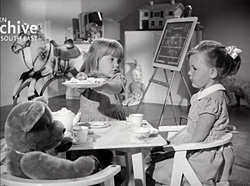 Advertisement featuring a child using toy blocks to spell out CDF - the name of the product (which stands for Chicken Dog Food). A voice-over explains the nutritional value while a puppy is seen eating the food. The final packshot shows the price of cans.

A promotional film showing the processes involved in making Shippam‚Äôs paste; from farm to factory, narrated by MacDonald Hobley. 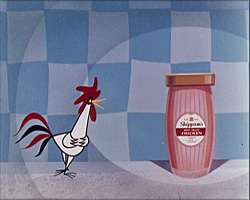