This collection spans five decades and as many continents, comprising an enormous variety of films featuring everything from family outings to the workings of phosphate mines. Amateur filmmaker H. A. Voss worked for the British Phosphate Commission and travelled extensively both on business and for pleasure. The Voss family lived in Switzerland between 1948 and 1949, and many of the films in this collection feature travels abroad as well as domestic scenes of family life. After Voss's death in 1957, his daughter Rosalind Foster continued making films, and the later footage, including family scenes and films of a world cruise, is her work.
The earliest films date from the 1930s. Some record family life at home in Coulsdon, Surrey, and holidays in Britain, while others are documents of trips Voss made in a professional capacity to phosphate mines in America and the Pacific Islands. This collection contains some films made during the Second World War, and a great deal of films feature travel in the post-war period, including visits to bomb-damaged German cities. During the forties Voss also returns to America, documenting more of the Florida mines. He also travels across France and Spain, and make many trips to the Alps, recording some spectacular scenery en route. During the family's time in Switzerland, Voss films winter sports in the ski resorts. His later films feature travels in Norway, and across the US, from the East Coast cities to the southern states, California and Hawaii. The collection includes films of Egypt, Hong Kong, and extensive footage of Japan, which Voss visited three times between 1949 and 1953.
The latest films in the collection, filmed by his daughter, Rosalind Foster, feature family scenes as her children are born and grow up in Burpham, Surrey, and more travels abroad. Foster films the family at their villa in Menorca, and cruises which take in South Africa, Australia, New Zealand, Central America and the West Indies amongst other locations. 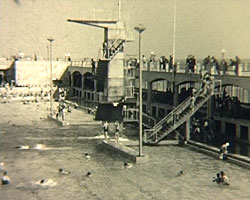