The Sonny Hanson film collection contains a range of films filmed by Ashford resident John Hanson Richardson, who was more commonly known as 'Sonny' Hanson. His interest in amateur film-making began in the 1930s - he made films both independently and as a member of The Ashford Association Film Society. Screen Archive South East holds examples of both. Amongst the independent films are the documentary-inspired films Watery Trail: River Medway (1938) and [Ashford Railway Works: Local Industries and Farming] (ca. 1947). There are also more personal films which record hobbies and holidays. These include [Along the Rauma Railway in Norway] (ca. 1931), [Motor Club Events] (1938; 1939) and [Miniature Railway] (ca. 1967). The films are typically well-made and titled, and are illustrative of an amateur film-maker who was not only enthusiastic towards the craft, but who was also highly skilled.

The films of The Ashford Association Film Society which form part of the Sonny Hanson collection also demonstrate skillful amateur work. Sonny Hanson alternated his role between cameraman, director and scriptwriter in the Society's productions. They are all silent fictional films and include Mrs Newlywed's First Dinner (1940s), Cinderella. A New Version of an Old Story (1948?) and The Magician's Wife Makes The Christmas Cake (late 1940s). The films are typically extensive works of fiction, which utilized the talents of amateur enthusiasts both in front of and behind the camera. 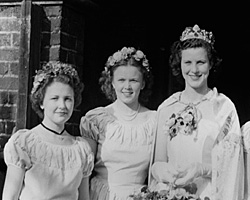 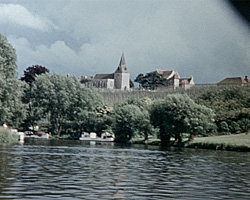 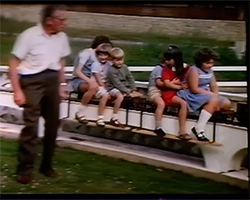 A short film of the amateur filmmaker Sonny Hanson organising rides for local children and friends on his miniature steam train which runs on a raised track around the perimeter of his front garden.