This is one of a series of newsreels made by John Clague, featuring events in the town of Herne Bay in 1958. The film includes the winter snow, the Glenbervie Home 21st Anniversary, St. Bartholomew's annual church fete, the Herne Bay Sailing Club Firefly Festival, Beltinge Memorial Hall Fete, the carnival and the Kent County Agricultural Show held in Mote Park, Maidstone. Please note only the Kent Agricultural Show clip is online. 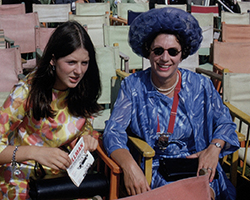