Film-maker, John Mitchell, was a member of the Brighton & Hove Photographic Club. He made several vibrant film portraits of Brighton and Hove and Sussex in the 1960s, primarily focusing on visitor attractions. For example, many of his films include scenes in the Brighton area such as the attractions on the Palace Pier, fairground rides, the Volk's Electric Railway, and the London to Brighton Veteran Car Rally. Other films show excursions to London and to other locations including the Farnborough Air Show, The Bluebell Railway and the wildlife animal parks at Longleat and Bentley.
Amongst the films of entertainment and activities in the region, John Mitchell's films also represent other sides of life in Brighton. These include footage of an Armistice Day memorial ceremony, fishermen at work at Shoreham Harbour, and delegates gathering at a Labour Party Conference.

A family film of a Christening. The family arrive with the baby dressed in a Christening gown and the baby and mother are photographed outside the church. The film ends with family portraits being taken outside church.

A well made amateur film of a sightseeing trip around London including a visit to St. Paul's Cathedral, Trafalgar Square, Buckingham Palace and take a boat ride on the River Thames. 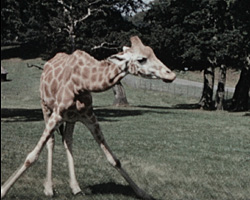