Ernie Trory was a leading figure in the Sussex Communist movement, joining the Communist Party at the age of 18 in 1931. He participated in the 1930s Hunger Marches, and was a Sussex Communist Party District Organiser at the time that he made his films. The films in the Ernie Trory collection include two films, which were made as "People's Newsreels", intended to promote and record the work of the Communist Party in Sussex. The films feature Communist Party demonstrations, marches, commemoration of Spanish Civil War fighters, and a party Congress. Consequently, these films represent an important part of the social and political history of the South East and offer a unique first-hand film record of communist activities in the region in the 1930s. Ernie Trory went on to write a number of books and texts on communism and other topics.
Besides his communist party and film-making activities, Brighton resident, Ernie Trory was also a keen swimmer and weightlifter; swimming in the sea off Brighton and weight lifting well into his 70s. A Pathé newsreel film held in the Archive captures Ernie Tory with members of the Brighton Swimming Club taking a swim in the sea during the winter. 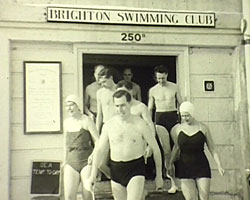