The Gowlland family films span the 1930s to the 1960s, offering a vivid portrait of family life. The well constructed films record the Croydon-based family across the decades, starting with the arrival of their three children and following them growing up during the Second World War.

The films go on to cover family holidays, outings and local events in the post-war years, recording the children until the youngest son's wedding in the early 1960s. Geoffrey Price Gowlland (principally behind the camera), his wife Amy Mary (known as Peggy) and their three children, Rosemary, John and George Mark (known as Mark) are featured in the films.

Geoffrey Price Gowlland jointly ran the family business with his father in Croydon, where they produced medical and scientific instruments. He was a keen amateur family historian, spending time meticulously researching his family background whilst also recording his current family events and activities on cine-film.

Many of the Gowlland films made during the Second World War keenly observe the changes taking place whilst also showing how family life continued as normal regardless of the changes. It is this portrait of everyday family life during wartime, coupled with the time span of the collection, that makes this set of films a notable collection in the Archive.

The Gowllands have continued their interest in family history, producing the Gowlland family website, which comprehensively documents the family's past. Films from this collection have also been featured in the BBC series 'Nation on Film', which was broadcast in association with the Open University, in 2005.

A short film of the Gowlland family on an outing to Tonbridge boys' school where they visit the town, watch a cricket match, and attend the school's 'Skinners' Day' marking the end of Summer term. The intertitle 'With the O'Farells on the Thames' precedes scenes of the Gowlland family boating at Moulsford-On-Thames in Oxfordshire.

Two films from the Gowlland family. The first shows Mr and Mrs Gowlland on holiday on the Riviera. They travel by BEA plane to Nice and stay in Monte Carlo where they film the main sights in the town and surrounding area and the local Citron festival and carnival. The second film has scenes of an Easter parade in Hyde Park showing crowds and the passing carriages. 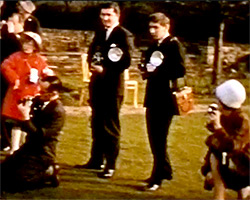 This film shows members of the Gowlland family at their home 'Poyntington' in Westerham, Kent. John and Elizabeth Gowlland arrive with a toddler and baby. The children play in the garden with their parents and grandparents. On an outing to the Bluebell Railway the family board the steam train at Sheffield Park Station and ride to Horsted Keynes.