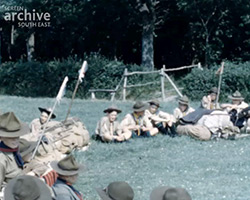 Scenes of the Emberton family, including their two daughters (in their teens/early twenties) on various outings and on holiday.

A variety of subjects filmed by architect Joseph Emberton including a trip to the Netherlands to look at architecture and Lacrosse matches at Roedean.