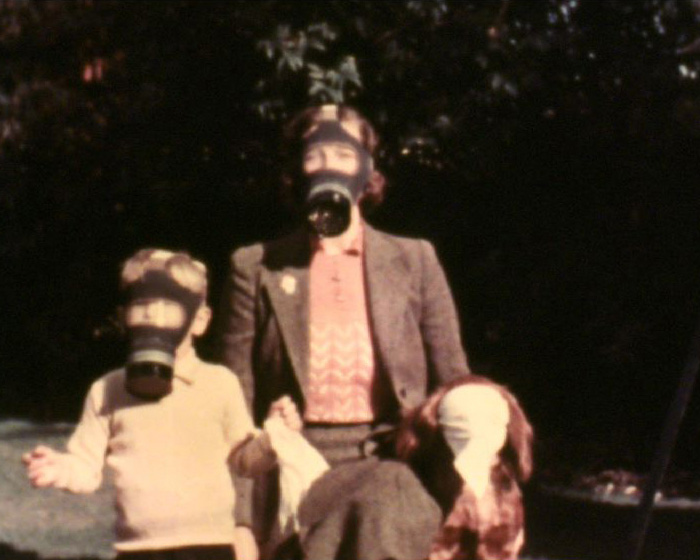 The film opens with the title: 'This film was made by Eric Giles in London in 1938 at time of the Munich Crisis'. Intertitles follow with 'Crisis' and 'September 26th-30th 1938 - Storm Clouds have been gathering for sometime' (Shot of clouds at sunset), followed by intertitle: 'War' and 'After weeks of anxiety, events suddenly develope into sheer crisis' (sic) followed by newspaper headlines, posters and a sign recruiting Air Raid Precaution (ARP) volunteers.

Intertitle: 'London prepares for the worst horror imaginable - Air Raids'. Images follow of A.R.P signs and notices, a shot of a gas mask fitting station with masks placed on a table, and a woman, young boy and a man wearing a gas mask (possibly the Giles family?).

Intertitle: 'On all hands evidence appears of orderly preparation - Green Park'. Images follow showing construction of shelters and trenches in Green Park. Crowds of people stand around in the park watching the events happen. Mixed shots of several London streets, including Piccadilly Circus and the Burlington Arcade buildings, follow.

Intertitle: 'By the middle of the week all Londoners begin to realise that there is an almost inevitable risk of war'. An armoured tank is shown on Westminster Bridge next to the Houses of Parliament (House of Commons) and the Elizabeth Tower (Big Ben). Intertitle: 'War'. Further views show traffic, a special war service bus and a tank on Westminster Bridge. The street signs for 'Downing St'., 'Whitehall', 'Lincoln's Inn Fields' are seen in close-up. The film continues with further shots of men digging trenches in Green Park and various news stand A-Frame boards with headlines 'Hitler can be stopped' and 'How Premier Scared Hitler.

Intertitle: 'Crisis'. This is followed with further shots of uniformed military personnel and vehicles moving through the park, construction of several trenches, and gun armaments being placed in the park.

A street sign for 'Hyde Park Corner' opens the next part of the film, followed by a newspaper salesperson with the headline 'The balloons go up' followed by shots of RAF personnel inflating air balloons using large vehicles filled with a gas on the back of a lorry in Hyde Park. Crowds gather to watch.

A bylaws sign for Regent's park, is followed by traffic moving along a road. Air raid shelters have been erected on Regent's Park (?) and further work is taking place to reinforce the walls with planks of wood.

Intertitle: 'Suddenly of the Friday the clouds lift'. This is followed by a shot of the Wellington Memorial at Hyde Park Corner

Intertitle: 'Thanks to Mr Neville Chamberlain it is -'. This is followed by shots of a newspaper seller with a board that reads 'Peace Agreement Signed' and' Europe's Day of Joy'

Intertitle: 'And once more London resumes its normal life'. This is followed by shots of mounted guards outside Horse Guards Parade on Whitehall and a shot of the Cenotaph surrounded by cars and traffic (film is damaged on the last shot at the end of the reel).