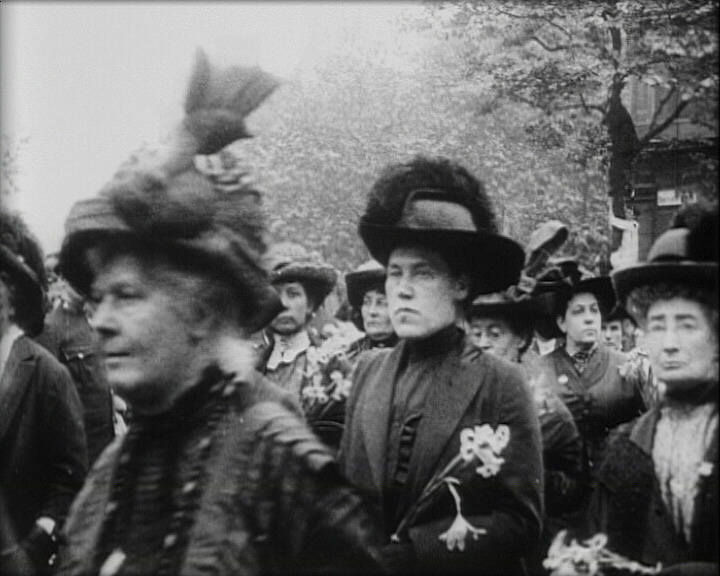 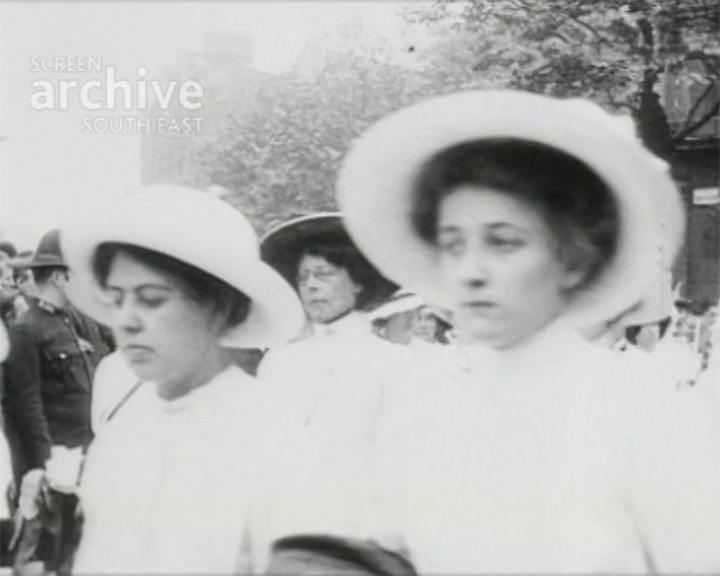 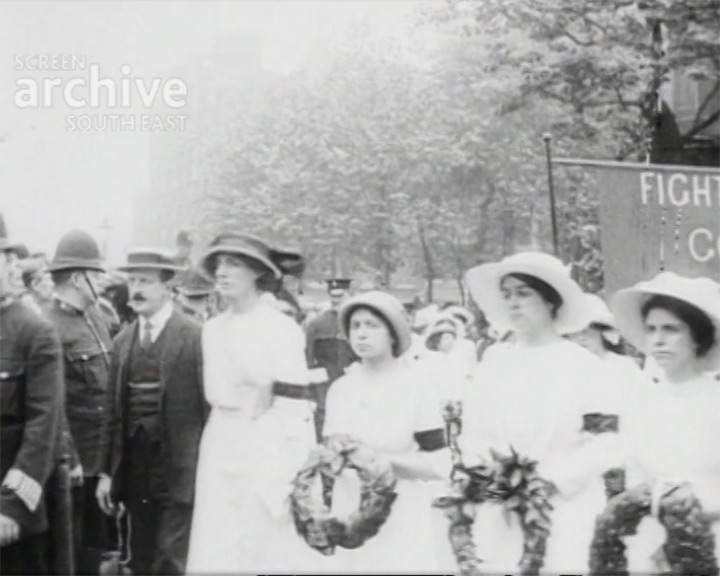 The film opens with a shot of the horses rounding Tattenham Corner in the 4th June 1913 Epsom Derby. In the far distance Emily Davison steps out in front of the King's horse Anmer - she, the horse and its jockey Herbert Jones are thrown to the ground - the race continues. Ten days later the camera films Emily Davison's funeral procession. Suffragettes of all ages file past the stationary camera, solemnly forging the way for the coffin borne on a horse-drawn carriage. The younger women wear white dresses with black armbands - some carry wreaths and cradle lilies, others carry defiant banners which proclaim 'Fight on and God will give the Victory' and 'Give me Liberty or give me Death'. The older women are dressed in black - all walk in step to the marching band that accompanies them. Mourners and photographers crowd the area outside St George's Church in Bloomsbury, watching the coffin being carried up the steps to the funeral service. 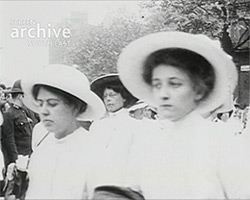 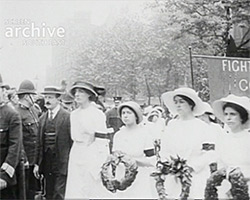 The 1910s proved to be a hugely significant time in the history of cinema in Britain. It was a decade which saw the establishment of purpose-built cinemas both in response to, and in encouragement of, the increasing standardization of spectatorship. Many millions of people were visiting the cinema every week, watching programmes which comprised a range of material including features and shorts. Newsreels were integral to the cinema programmes, supplying national and international news and current events to people on a scale hitherto unknown. The most prominent newsreel companies in Britain during this era were Pathé Gazette, Topical Budget and Gaumont Graphic. The Warwick Trading Company, which made The Nineteen Thirteen Derby At Epsom (1913) and Funeral Procession of the Woman Who Dared (4 June 1913; 14 June 1913) - both of which are housed at Screen Archive South East - was also known for its commitment to news and actuality. This commitment had been nurtured by its managing director Charles Urban who had helped build Warwick Trading into one of the country's biggest production and distribution companies at the turn of the century. Urban's enthusiasm and belief that cinema audiences could be educated through entertainment attracted leading figures to the company, including the Hove pioneers G. Albert Smith and James Williamson.

Since its inception in the late 18th century, The Epsom Derby has always commanded news coverage. As one of the world's most flat prestigious thoroughbred horseraces, The Derby attracts thousands of racegoers from all social classes to Epsom racecourse every June. The advent of moving images allowed for the excitement of the event to be witnessed by global audiences - the leading newsreel companies ensuring that their cameras were present.

The 1913 Epsom Derby has come to be remembered as more than just a horserace - it was the event in which the Suffrage Movement gained its first martyr, captured on film for contemporary and future audiences. For reasons which remain unclear to this day, Emily Davison stepped out in front of the King's horse Anmer as it rounded Tattenham Corner, resulting in head injuries from which she died four days later. It is generally assumed that Emily Davison had been attempting to attach the tricolour ribbon of the Women's Social and Political Union (WSPU) to the horse's bridle - it was a statement made not only in front of the King and the racegoers, but also in front of the millions who would later watch the event in cinemas. The presence of newsreel cameras guaranteed nationwide publicity at a time when the Suffrage Movement was gathering strength and visibility. The militant arm of the movement was driven by a belief in 'deeds not words' and the new medium of cinema provided the activists with a tool of visual spectacle. Their awareness of this was demonstrated by the ceremonial funeral afforded Emily Davison following her 'sacrificial' death, recorded in the Screen Archive South East film Funeral of the Woman Who Dared (4 June 1913; 14 June 1913). Her coffin was carried through central London, accompanied by 6,000 women and ten brass bands before being taken by train for burial at Davison's family grave in Morpeth, Northumberland. This visual nature of this spectacle was perfectly suited to the gaze of the moving image camera and it ensured extensive media coverage for the Suffrage Movement.

Colmore, Gertrude. The Life of Emily Davison: An Outline. London: The Women's Press, 1913

A copy of this book, which was written at the time of Emily Davison's death, is available at The British Library.

A copy of this biography is available at The British Library.

Stanley, Liz and Ann Morley. The Life and Death of Emily Davison: A Biographical Detective Story. London: The Women's Press, 1988

A copy of this biography is available at The Women's Library.

The Mary Evans Picture Library holds a collection of pictures which cover a vast range of international, historical subjects including the Suffrage Movement. The Library's catalogue is searchable online.

The Museum of London Picture Library

"The Museum of London Picture Library holds over 35,000 images illustrating the history of London and the life of its people from prehistoric times to the present day." The Library has a large collection of images relating to the Suffrage Movement. The Library's database is searchable online.
http://www.museumoflondonprints.com/

"The Women’s Library @ LSE documents all aspects of women’s lives, with a particular emphasis on the lives of women in the UK and the great political, economic and social changes of the past 150 years". The collections also document the anti-suffrage movement in Britain, as well as provide information on the campaign for women's suffrage from many countries around the world. Catalogues are searchable online.
http://www.thewomenslibrary.ac.uk/index.html

"The Working Class Movement Library (WCML) is a collection of books, periodicals, pamphlets, archives and much else that records the history of the trade union, labour and radical movement in Britain from the late C18th to the present day [including collections on] suffragettes and suffragists..." The WCML catalogue is searchable online.
http://www.wcml.org.uk/

"Footage from 1912 & 1913 Derby with suffragette Emily Davison running into path of horse." The film can be accessed via the British Pathé Website. Pathé holds numerous other films which illustrate the Suffrage Movement.
http://www.britishpathe.com/

This Topical Budget newsreel includes footage of Emily Davison jumping in front of the King's horse at the 1913 Derby. The film record can be found on The British Universities Film and Video Council's News On Screen database
http://bufvc.ac.uk/newsonscreen

This complete print of a 1913 Pathé Gazette includes footage of Emily Davison jumping in front of the King's horse at the 1913 Derby, and a riot by suffragettes trying to secure the release of Sylvia Pankhurst at Trafalgar Square. The film can be accessed via the British Pathé Website. Pathé holds numerous other films which illustrate the Suffrage Movement.
http://www.britishpathe.com/

The British Library houses the run of The Suffrage, the official organ of the Women's Social and Political Union (the newspaper was renamed Britannia in October 1915).

This is the website for the British Universities Film and Video Council (BUFVC), "a representative body which promotes the production, study and use of film and related media in higher and further education and research." The website includes the News on Screen database and has links to various newsreel resources.
http://www.bufvc.ac.uk/