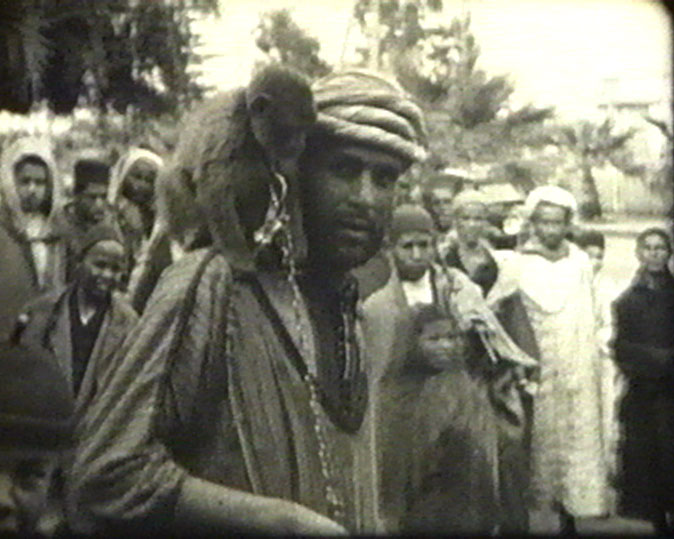 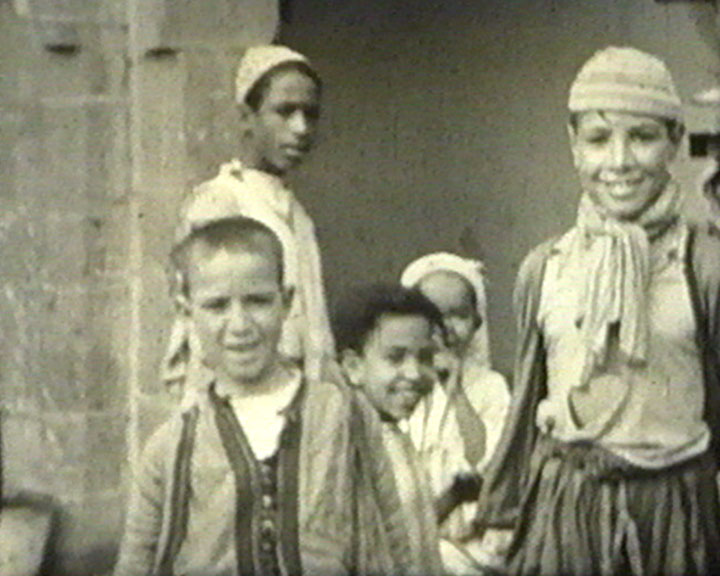 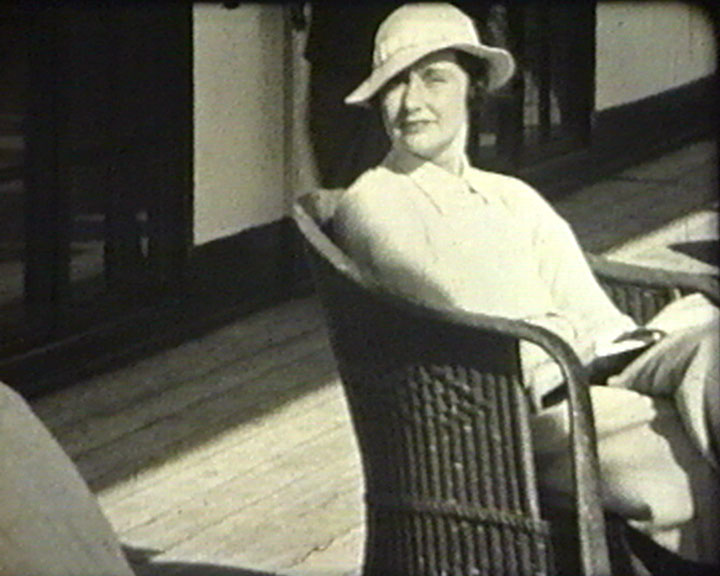 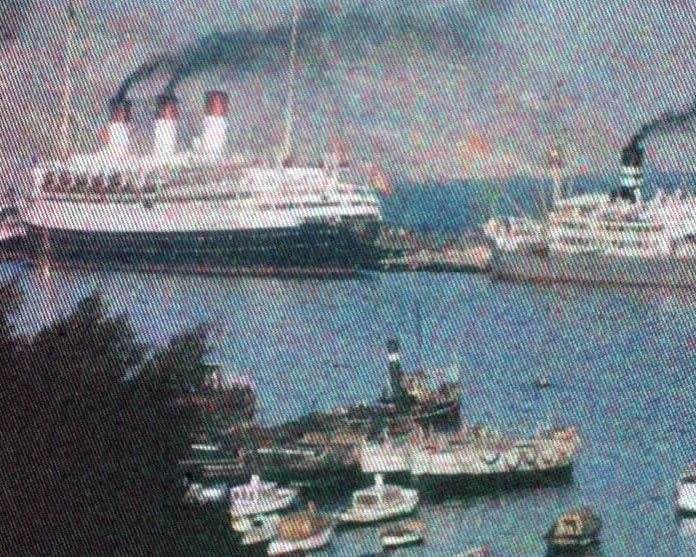 The film shows the couple departing by car (number plate GU 804) and the passenger ship in dock at Southampton. Scenes on board the German passenger ship the Cap Arcona show the sea gulls flying alongside, the choppy water and the deck and bridge of the ship. A Nazi swastika flag flies from the stern of the ship. International flags fly from the ship's rigging and a man climbs down from the crows nest where a Christmas tree has been fixed. Panoramic shots of land indicate that they are nearing arrival. A group of friends stand on the boat deck waving. On shore, there are scenes of African men in traditional dress; one man hangs on to the back of a coach as it drives along, one man rides on a donkey, another walks by. Mrs Emberton and other women from the tour party stand by the tourist coaches. Two African men are filmed sitting on the ground and Mrs Emberton poses for the camera with three men outside a building [possibly a mosque?]. A short sequence of film shows inside the mosque [?] from the back, during a meeting. Outside, two boys stand and pose for the film-maker, a man wearing a turban walks past, and men wearing turbans and Fez's are filmed sitting down. Groups of men and women are filmed in streets, interspersed with scenes of the white men and women in the tour group. Scenes in a market place [or street] show a boy dancing whilst holding a snake; men with performing monkeys on a rope; men in turbans, some sitting, some standing looking at the camera; men using sewing machines and other men on the street. The Emberton's and friends are filmed walking amongst people on the street. The group of women are then seen on a small boat. The captain briefly holds out a swastika flag flying from the back of the boat. A train journey follows, with views from the train and shots of Mrs Emberton and friends in the train carriage. Mrs Emberton is filmed adjusting her hat. A shot of the train's engine is followed by scenes at the ship's dock. On the deck of the cruise ship on the return journey, people play shuffleboard, and Mrs Emberton and others relax in chairs on the deck.

Accompanying this film is a section from the same trip, parts of which are filmed in colour using Dufaycolor film stock [ID No.1541]. This section shows the ship with its red and white funnels; a visit to Rabat with views of the outside of 'Rabat Ville' train station; a display with men in traditional or military costume on horseback [possibly, the mounted guard of Rabat], and views of Rabat Mosque. Views back on the ship are followed by scenes in another harbour [possibly Tenerife in the Canary Islands?]. On shore, a group of women ride in an open carriage; a monkey on a leash is filmed climbing a tree; a group of men in swimming trunks play a ball game on a beach with dark sand; and African men sell cloths. In another harbour, [possibly in Portugal] the shoreline and the ship's crew are filmed from the ship. A small boat with the Hamburg Süd line flag carries the group to shore. A group of women are filmed selling flowers, wearing traditional dress and carrying baskets on their heads. A boy dressed in white and wearing a hat tends to a cow pulling an open carriage. Views of the city and the harbour are followed by views from one of the carriages being pulled by cows.

Also accompanying this film is another section from the same trip, on a separate roll, in black and white [TID No.1535]. This section begins with a large crowd on deck wearing what look like life jackets. This is followed by scenes of people lounging on the deck of the ship, shots of the life boats and the sea rushing by and games are played on the deck. The ship makes a stop at Funchal harbour in Madeira. Passengers are seen getting off the ship and sitting in cars. Several pans of the mountains are followed by scenes of people riding in the traditional wicker toboggans down the streets of Funchal, and people sunbathing near the shore. Further scenes on board the ship include the crew on deck, waiters preparing dinner tables, and games on deck. The final sequence shows people disembarking at Southampton. 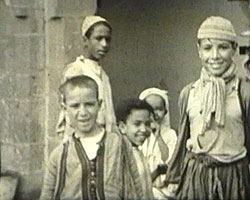 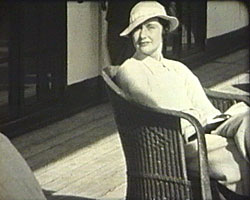 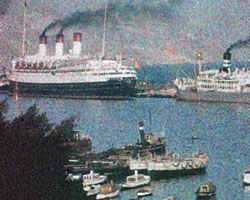 Fashion Notes: The film shows British people attired in fashionable Western dress in Africa, which stands in contrast to the traditional African dress also seen. This film has examples of British women in skirt suits and a pair of two-tone brogues.