Mr A. C. Barnden, headmaster of London Road School in Burgess Hill, made several films in the late 1940s and 1950s. The films were intended for use in the classroom and demonstrate a keen interest in capturing and conveying local rural industry subjects, as shown in A Bottle of Milk (ca.1947), Haytime (1949?), and About Horse Shoes (1949). The collection also includes instructional items such as Making a Film and Making a Single Section Book (ca. 1953). Mr Barnden also recorded school activities such as sports days, school trips and plays. The collection also features a series of commercially made films on educational topics.
The London Road School collection consequently illustrates the educational role that film could play in schools, where they acted as audio-visual supporting material in the classroom.

Amateur film with opening shots illustrating basic film making processes, particularly splicing. This is followed by a short fictional film depicting five characters in a waiting room, including a kissing couple, who appear to catch fleas from a tramp. 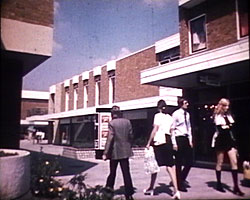 This film provides a record of the development of 'The Martlets' centre, Burgess Hill.